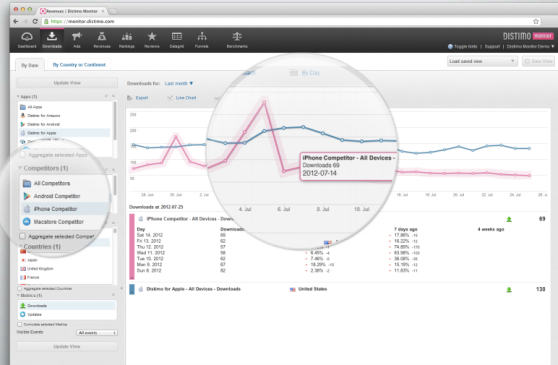 For app developers, victory means having as much data on competitors as they do on themselves.

That idea is at the heart of AppIQ, the new data service from app store analytics firm Distimo. AppIQ gives app developers the low down on how their products are performing in comparison to the competition. Obviously, this includes volume and download revenue, but Distimo also offers the ability to compare in-app revenue.

While AppIQ is only available for apps in the App Store and Google Play, Distimo plans to expand the service to the Amazon Appstore and the Mac App Store soon.

Naturally, none of this comes for free. Pricing for AppIQ is variable and costs more for apps in crowded categories like photo sharing and games. Distimo also charges a premium for developers looking for data in multiple countries.