Above: Judy Chen showed how your phone can be wired into your car display, which can mirror the image on the phone. 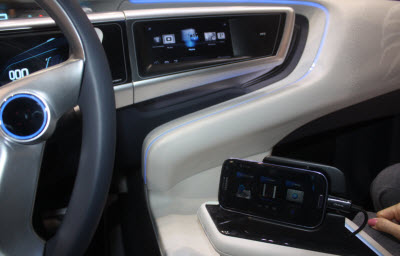 A lot of mobile apps could be useful in your car, but most vehicles don’t have the equipment to deliver them to you safely and easily. But the MHL consortium has begun a push to embed the proper wiring in cars so you can connect your Android smartphone or tablet to the display in your car.

The new adapters in cars are part of a trend to make your vehicle into an electronic haven.

Hyundai, JVC-Kenwood, and Pioneer showed off working versions of the connectors at the Consumer Electronics Show in Las Vegas. Hyundai showed how an Android smartphone could connect via a micro-USB connector on a phone to a HDMI port in a new Hyundai automobile (pictured right). That enabled a driver to access mobile apps on the touchscreen display in the car.

With a larger display, it becomes a lot easier to control an app, such as a navigation program. You can also operate the app at high speed and with outstanding visual quality, as MHL supports 1080p video transfer and eight channels of digital audio. You can also charge your phone through the connector. The car display functions as a second screen for the mobile device. What is cool is that you can control the smart device by touching the car display, which sends commands back to the smart device instantaneously.

The MHL technology fit right in with the 2014 model of the Hyundai Genesis sedan, which has a fancy car infotainment system with Bluetooth 3.0, a full set of digital audio services (Gracenote, Pandora, Sirius XM radio, and HD radio). It has a 9.2-inch screen and uses face-recognition technology to identify you when you get into the driver’s seat. It has a BlueLink system that allows you to hook the MHL-enabled device into the car’s display.

“We have a lot of momentum in the automotive market,” said Judy Chen (pictured), the president of the MHL consortium, as we walked around the automotive section of the CES show floor. “It makes sense because your smartphone will have a lot more computing power than the computer in the car, which you won’t be replacing every year.”

The car maker filters programs through Hyundai’s certified app, which uses “driver assist” technology. That means it will not allow you to view certain kinds of apps, like movies or games, while the car is driving. You can, however, access those apps while the car transmission is in park. This adapter technology will allow you to use many more apps than simply the ones that a car maker might build into a navigation unit.

“You can’t just run any app because of safety issues,” Chen said. “And you can’t have any lag. If you are driving a car and you’re having trouble reading your screen or touching your screen, then you have a real safety problem. This is nice because it is instantaneous. You can use voice commands as well.”

Silicon Image created the original cable, which has now been broadly adopted. Sunnyvale, Calif.-based MHL was founded in 2010 by Nokia, Samsung, Silicon Image, Sony, and Toshiba. Their aim was to create a standard for audio and video connectivity for mobile devices. You can use MHL to plug your smartphone into a big-screen TV so you can watch your mobile content on a big display and charge your phone at the same time. The MHL connector has five pins, with five separate wires, that allow it to deliver data without delays. It can provide 900 milliamps of power back to the mobile device.

Hyundai plans to introduce the MHL (which stands for Mobile High-Definition Link) capability in upcoming models of cars. JVC-Kenwood and Pioneer showed MHL working with aftermarket stereo equipment at CES. BMW has also adopted MHL, but it hasn’t described what it will do with it yet.

MHL is gathering momentum, Chen said. The installed base to date is more than 220 million products and 180 participating companies. In the past year, the industry released the first MHL-enabled digital video recorders, Blu-ray players, laptop docks, PC monitors and projectors.

For now, those devices will simply mirror their screens on the car screen. But over time, MHL will like head in the direction of enabling other applications, such as embedding a mobile screen within a sector of the larger screen.