Designed to facilitate streaming of high-quality panoramic VR content from any location with a 5G network, the system consists of an 8K 3D camera with 360-degree video recording abilities, a Yamaha-developed spherical 3D microphone with 64 channels of audio recording, several computers, and a 5G base station. Docomo, Japanese TV station HTB, and NEC successfully tested the system yesterday at a rehearsal for the famous Sapporo Snow Festival in Hokkaido.

The carrier has been working on a 360-degree 8K VR streaming system since last year, in hopes that VR headset wearers will enjoy ultra high resolution, stereoscopic live videos that can be viewed from different angles. Processing and bandwidth demands are incredible, as the output from multiple camera lenses needs to be instantly stitched together multiple times each second and then streamed to a 5G network, along with perfectly synchronized 3D audio. 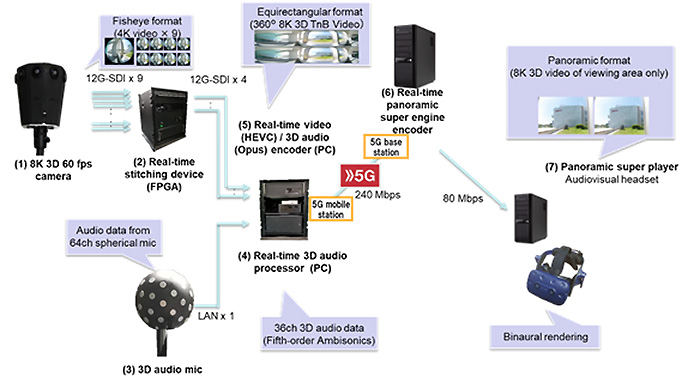 Now that the streaming system is ready, the question is how 8K 3D VR content will actually be viewed by end users. Docomo describes its viewing device as a “panoramic super player audiovisual headset” and shows an image of an HTC Vive Pro, which is likely only being used to demonstrate the platform.

There’s presently neither a 5G-ready Vive nor enough operational 5G networks to release such a product. That’s expected to change over the next year or two, however, as Japan will be launching its own commercial 5G network to follow ones debuted last year in the United States and South Korea. With a working streaming platform now in the wild, compatible headsets won’t be too far off.