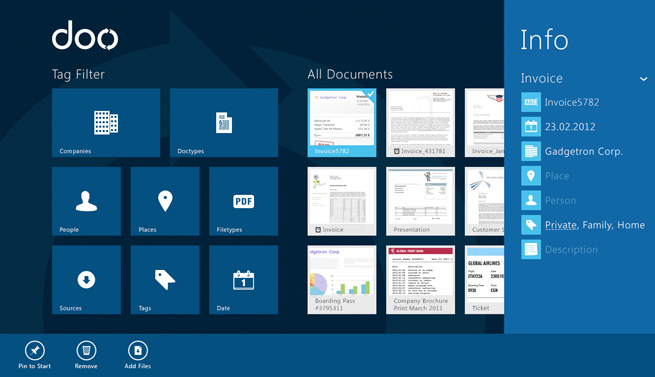 Document management startup Doo.net has boldly launched a Metro-style application for the upcoming Windows 8 OS even though it has yet to release a version of its app for Win 7.

Doo.net’s native application for Windows 8 (and OS X) aims to help people and businesses better manage their glut of documents using the cloud. All of your documents are locally stored inside the native app, but they’re also backed up and synced with the cloud. The Metro app looks well-designed and provides organization between companies, document types, people, places, and more. It also offers integration with Dropbox and Google Docs and can collect docs in your email account via IMAP. Although the app seems a bit simple in purpose, the enthusiasm to create an app for Windows 8 is compelling.

Doo.net founder and CEO Frank Thelen told VentureBeat that he’s willing to bet on the success of Windows 8 because of the “power of Microsoft” and Windows’ massive installed base. “Windows 8’s UI is one of the best UIs we’ve ever seen,” Thelen said. “And the new Surface tablet is a little better than the iPad and will be successful.”

While I’ve been skeptical of Windows 8 adoption, the company just announced that XP, Vista, and 7 owners can upgrade to Windows 8 for just $40 a pop, which makes it more likely people will buy in. A good price, innovative hardware like Surface, and strong apps like Doo.net will make it a viable operating system. Thelen expects the launch of the OS in a matter of months.

Although the company has bet much of its success on Windows 8, it also has a working Mac app that can help Apple users manage their documents. Doo.net is also working hard on an app that will work for Windows 7 that it expects to launch this year, along with mobile apps for iOS, Android, and Windows Phone.

Take a look at the gallery below to see a few more looks at Doo.net’s slick Metro app and its Mac app: