Doppler Labs continues to drive investor interest in its wireless listening system. The company announced that it has closed an additional raise of $24 million, led by The Chernin Group. An “opportunistic” follow-up to its Series B, the new capital will support Doppler Labs’ efforts as it prepares for the holiday season and sales of its Here One wireless listening system.

Founded in 2013, Doppler Labs wants to use technology to transform how we hear the world. As company CEO Noah Kraft explained to VentureBeat, what Doppler Labs is doing for our ears (a la “Star Trek”) is akin to what Microsoft did by putting a computer on the desk and Apple by putting a powerful computer in our pockets.

The first product that Doppler Labs has in the market is the Here One, which Kraft dubbed an “all-in-one system” that can amplify speech, grant access to Siri and Google Now, stream music, take phone calls, and layer digital audio over real-world streaming audio. The device may look like fancy earphones, but there’s more to them. Here One features adaptive filters that can dull approaching sirens from emergency vehicles, minimize office noise, and more. But it also allows you to chat normally with other people without needing to take the earbuds out. 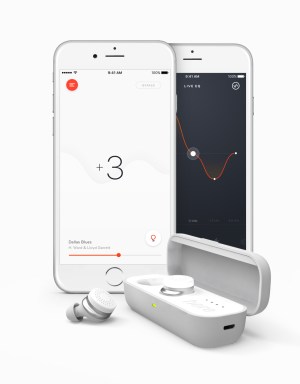 “It’s the first Magic Leap for the ears,” Kraft said, while suggesting that in the long-term, Doppler Labs’ goal is to make a device that stays in your ear all day.

In addition to the investment from The Chernin Group, the company has raised funds from individual investors Kevin Efrusy, David Geffen, Dan Gilbert, Henry Kravis, and Anton Levy. The selection of these investors is notable in that most have an involvement in the media and entertainment space, which is where Here One’s benefit may be most readily apparent. Prior to its launch, Doppler Labs created a prototype and distributed it at the Coachella music festival. The idea was to get feedback but also to allow wearers to better experience the bands on stage.

“Doppler is trying to create a new product category that improves how we experience our auditory world,” said Efrusy, a partner at Accel. “It’s this discipline and ambition that attracted me, and both tend to be the key ingredients for consumer breakthroughs, along with some luck.”

Doppler Labs intends to spend capital on hiring more engineers while also improving its Here One platform. The company is now accepting presale orders for its flagship product, with an expected ship date of some time this holiday season.

Previous investors in Doppler Labs’ Series B round come from The Chernin Group, Wildcat Capital Management, Acequia Capital, Live Nation Entertainment, Universal Music Group, and WME. As an opportunistic round, there was quite a bit of demand from investors in what the company is doing, and Doppler Labs perhaps felt it prudent to stock up on capital as companies gear up for what could be a busy shopping time.

To date, Doppler Labs has raised more than $50 million in venture funding.

Updated as of 9:54 a.m. Pacific on Tuesday: Correction to reflect that Here One doesn’t grant access to the calculator or calendar but rather to music, Siri and Google Now, and other features.