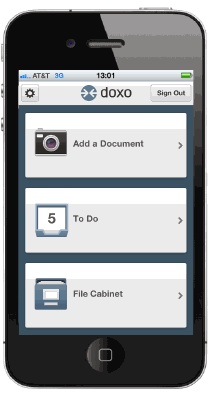 Doxo, a startup that wants to end the pain of paper billing, is bringing its service to smartphones today with the launch of its iPhone app.

The Seattle startup already provides its customers with a website where they can store and pay their bills. Now those users will be able to do the same thing on their phones — or, at least, they can check on their bills, and Doxo says it will add the bill pay functionality soon. It seems like a natural way to take care of your bills in short bursts throughout the day, similar to how Mint.com’s iPhone app has become one of the main ways I check on my personal finances.

The iPhone app (as well as future apps for Android and other phones) opens up some new use cases, said co-founder and chief executive Steve Shivers. One obvious example: People can now take photos of their bills from their phones and upload them to the app. Shivers added that many of the companies and organizations that Doxo serves aren’t going to build mobile apps, and if they did their customers wouldn’t download them — so Doxo becomes the only way for those companies to reach customers on their phones.

Since Doxo’s launch, we’ve seen the launch of a similar service from Hearst called Manilla (it launched at the DEMO conference co-produced by VentureBeat, and it ended its closed beta testing period yesterday).

When I asked how he sees the competition, Shivers argued that it’s a question of “What’s your priority?” Doxo is focused entirely on its bill management service, while Manilla is part of an aging media company, Shivers said. He also noted that Manilla uses “screen scraping”, where a service logs in to another website and pulls data on a user’s behalf. Doxo, on the other hand, partners with the different companies sending bills (and charges them a fee), a model that Shivers said is more sustainable.