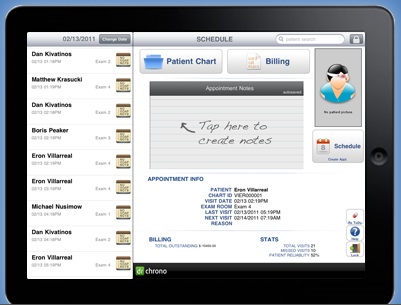 DrChrono, part of the current class of startups incubated by Y Combinator, has already received some press for its iPad app, which moves many of a doctor’s basic bookkeeping tasks onto Apple’s device. But when I talked to co-founder and chief operating officer Daniel Kivatinos, I wanted to know how he plans to get the app into doctors’ hands.

The key step, Kivatinos said, came at the urging of the Y Combinator team. The DrChrono app, which allows doctors to do things like take notes, write prescriptions, and access patient records on their iPad, actually launched shortly after Apple first released its tablet. At the time, the company charged a $2,500 set-up fee — after all this was a professional app providing real value to doctors. Kivatinos told me that YC partner Paul Graham has compared DrChrono to enterprise software company SAP, and SAP charges a big fee.

But after joining YC, Kivatinos and his co-founder Michael Nusimow decided that if they really wanted to bring the incubator’s “hacker culture” into the medical industry, they had to “let the floodgates open” — so they made the app free.

Now, more than 1,500 doctors have signed up to use the product, where less than 100 had signed up before (remember, this is an app for doctors, not consumers, so adjust your numbers expectations accordingly). DrChrono is now based on a “freemium” model, where doctors get the basic app for free, then pay extra for features like speech-to-text conversion (so a doctor could just talk into their iPad, and the app would convert their words into written notes) and electronic billing. Pricing starts at $99 per month.

Still, even with the cheap-or-free pricing, it seems hard to believe that large medical institutions are going to become customers of a new startup. Kivatinos said that when he first started the company, he tried to work with hospitals but found that the sales process just took way too long. Instead, DrChrono is working with small, private practices that have one to five doctors. Those doctors are often eager to switch to an electronic system (the financial incentives offered by the Obama administration for doctors to switch to electronic records help), but they can’t afford to pay tens of thousands of dollars.

You’ll probably be reading more about DrChrono soon. There are still some cool features that Kivatinos would like to add, such as allowing doctors to use Apple’s FaceTime ability to talk to patients. DrChrono will be demonstrating at YC’s Demo Day today and tomorrow, and the company will also start holding training sessions in Apple stores in the next few months.