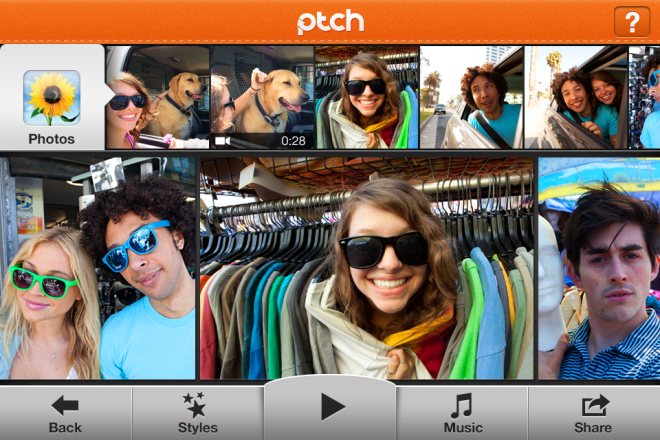 While the race is on to create a popular mobile video sharing equivalent to Instagram, Ptch, a free app launching today backed by DreamWorks Animation, is taking mobile media sharing a step further.

Instead of just focusing on pictures or video, Ptch lets you remix the media on your phone and social feeds to create a minute-long mashup that can be easily shared. Like Instagram and the plethora of photo filtering apps out there, Ptch offers different styles to give your mashups their own unique look.

You can think of Ptchs as short music videos made out of media on your device and Web services like Instagram, Viddy, and Twitter. The company calls Ptchs “living media,” since anyone who receives a Ptch can also remix it further to their liking. 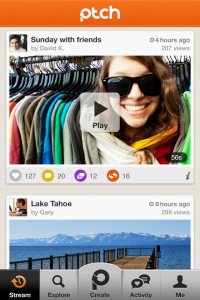 “We’ve built a product that’s trying to really address a significant gap in the market, the ability for broad consumers to creat interesting content in fun and fast ways,” Ptch CEO (and former DreamWorks CTO) Ed Leonard told VentureBeat in an interview this week. He made it clear that Ptch isn’t trying to replace the existing services users love, instead it’s trying to give people a new and interesting way to share their media.

Ptchs can resemble anything from a slideshow with photos, to a well-produced segment that’s mostly video. The app sports a clean and intuitive interface that should make it easy for anyone, from kids to the tech-savvy, to create their own bits of content easily.

Leonard, who was DreamWorks’ CTO for ten years, said the idea for Ptch came about when DreamWorks CEO Jeffrey Katzenberg asked his team last year to come up with ways to grow new businesses. The goal was to leverage innovation from within DreamWorks, which has thus far been entirely focused on creating films. So, aiming to do something different, Leonard formed a separate company to follow through with the Ptch idea.

The company has been working in stealth mode fort the last 9 months and has 20 employees (15 full-time and 5 consultants). About a third of the employees at Ptch came from DreamWorks, while the remaining two-thirds includes a who’s who of outside talent. Among them, there’s chief operating officer David Geller, who previously headed up Yahoo’s popular Fantasy Sports division.

Ptch is available for the iPhone 4 and 4S, but it isn’t yet optimized for the iPad. Leonard tells me the company is working on scaling out to other platforms, including a more robust Web version. Eventually, he imagines the company could offer items for sale on the Ptch platform, perhaps with an open marketplace for additional styles.

Ptch hasn’t brought in any investors outside of DreamWorks yet. Instead, Leonard says the company wanted to get some traction and then strategically bring in partners.