SAN FRANCISCO — The problem with wearable technology might just be that nobody particularly wants it.

Not if you call it “wearable technology,” that is. That’s the conclusion proffered by Marcus Weller, the chief executive and cofounder of Skully, the maker of a “smart” motorcycle helmet.

I spoke with Weller in a brief onstage appearance at the Wearable World Congress yesterday.

Skully’s helmet might not be what you think of as a “wearable,” which is a category that up to now has been dominated by smart glasses (Google Glass, mostly) and smartwatches (the Apple Watch, mostly). But a helmet is most certainly something you wear. 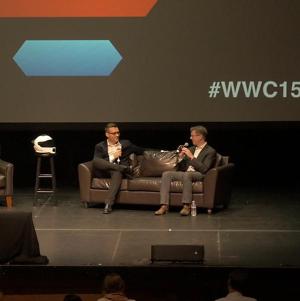 The technology inside the Skully helmet is pretty impressive. There’s a rear-view camera that captures a wide-angle, 180-degree view of what’s going on behind you, in your blind spot, and all the way up to the edge of your peripheral vision. There’s integration with your smartphone’s GPS, phone, and music capabilities. And there’s a transparent heads-up display that shows both the rear-view camera imagery (“de-warped” so it’s easy for your brain to understand what it’s looking at — which can be tricky with a fisheye lens) as well as important alerts, such as an upcoming street that you need to turn on in order to reach your destination.

It sounds like a lot of information to throw in front of a motorcycle driver, and I was a little concerned when Weller told me that his customers respond to the product by saying how it makes them feel like a fighter pilot, or like Iron Man. Making motorcycle riders feel more like a cartoon superhero doesn’t seem like the best way to keep them from wrapping themselves around some car’s rear bumper.

But Weller and his team have spent a lot of time thinking about how to make the interface as minimal as possible. Their goal, he said, is to “reduce cognitive load” — make it easier for your brain to process information, not harder.

“Users experience reduced cognitive load as delight,” Weller said, pointing to the radical simplification of the smartphone user interface that Apple achieved with its iPhone. Similarly, he believes that Skully’s helmet will make it simpler and easier for people to ride safe. Upshot: Fewer motorcycle crashes — and happier motorcycle riders.

But even though it’s technically a wearable, Weller steers away from calling it that. In fact, one of his most useful and actionable observations — especially for an audience full of people making wearable tech products — is that the word “wearable” really doesn’t work in marketing campaigns. It’s actually off-putting.

Instead, Weller advises wearable makers to focus on what their product enables customers to do: Ride safely, enjoy life better, have more fun, or be more productive.

I think that makes a lot of sense. Few people really wanted to wear Google notifications on their head, especially if it makes them look like a creepy, Borg-like technodork. So Google Glass didn’t take off.

A similar fate awaits the Apple Watch if the company can’t convince people that there’s a larger benefit. Just making someone’s watch “smart” isn’t appealing. And saving you the hassle of pulling your smartphone out of your pocket is not a particularly big leap forward. (Although some commentators have said that this actually is a remarkable improvement, I don’t think that glancing at your wrist instead of your phone is going to be a compelling advantage for most people.)

In short, both Google Glass and the Apple Watch were positioned primarily as wearable technologies, not as life-enhancing, superpower-enabling tools.

Both Google and Apple might take a page from Weller’s book. Skully broke Indiegogo fundraising records when it debuted in 2013, raising $2.44 million from individual backers. The company went on to pick up $11 million in series A venture funding in February of this year, and is set to begin delivering its helmets later this year.

And Weller didn’t get there by pitching them on how smart his helmet is, or how cool its wearable tech is. He got there by making them feel like Iron Man.