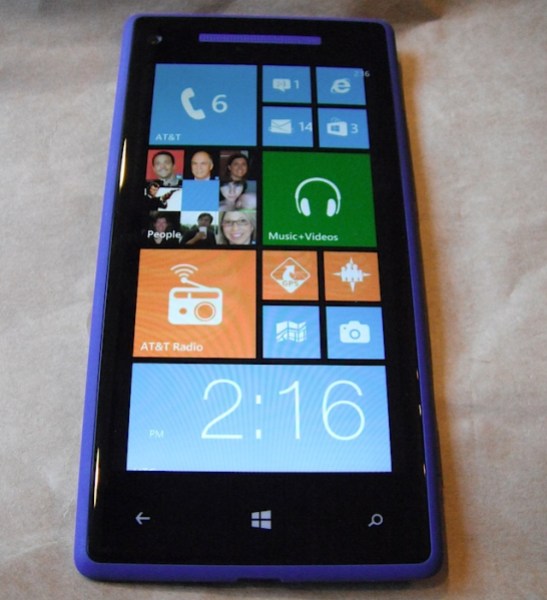 I want to love you, but there’s something coming between us.

When we first met, you were just version 7, but you impressed me. I liked how your home screen showed me all kind of nice things, like gentle reminders about my next appointment or photos of my Facebook friends. I liked the way that your photos app was always showing me new pictures of my niece. Something about the way your tiles flipped into place just made me smile.

I was so won over by your charms that I was even willing to go back to AT&T, a company that’s let me down many times in the past, for your sake. I took the big step and signed a two-year contract to get a Lumia 900, which was the flagship Windows phone last summer. It wasn’t your most flattering phone, but I will say it was impressive in almost every way: Fast. Big screen. Bright colors. And fun to use.

Besides, it was made by Nokia, a company I’ve always admired for its workmanship, for its well-designed and reliable devices.

But then something went wrong. One morning the Lumia 900 just didn’t wake up. I had plugged it in to charge overnight, but it just wouldn’t boot up, no matter what I did.

I went without a phone that day. Fortunately, I use Google Voice as my mobile contact number, so I could still get calls on my computer, even without a phone. When I got to the AT&T store that afternoon, they told me they’d seen this happen a few times but that they couldn’t do anything to fix it. They gave me a new Lumia 900.

I entered my Live.com information and signed in. There you were again: My Windows Phone OS. Except something was missing. My Live.com account included connections to Twitter and Facebook, so those contacts reappeared right away. But all of the groups of friends and family members I had created? Gone. I had to re-create each group, one contact at a time. Ringtones, music, and all the apps I’d downloaded? Also missing.

So I re-created the groups, re-installed my apps, got my music and favorite photos back onto the new handset. Everything went smoothly then for a week or two. But then it happened again: One evening, the Lumia locked up and just wouldn’t wake up. I couldn’t power it back on. Even after recharging it all night, it still wouldn’t work.

Back to the AT&T store I went. They replaced my phone again, after a short half-hour wait. Once again, I had to re-create my Google accounts, contact groups, apps, and such. Fortunately, I’d remembered to check the option to sync all the photos I took to Skydrive. Thank goodness for that.

At this point I was growing quite a bit less enchanted with you, Windows Phone. I mean, I still liked you. But reintroducing myself to you every time I got a new phone was getting tiring. Why couldn’t you just remember all the things about me, like my apps, my ringtones, all my contacts, and email accounts?

So things puttered along for a month. And then it happened again. One fateful morning, the Lumia did exactly the same thing again: It wouldn’t wake up.

Back to the store I went. This time, I begged them to give me a phone — any phone — so long as it worked reliably. So the nice AT&T representative handed me an Android phone, an HTC Vivid. I’ve used Android phones for several years, before I met you, so this was an easy transition, even if it wasn’t the phone of my dreams.

But here’s the thing. It’s three months later. I’ve seen your new style, Windows Phone 8, and I like a lot of things about you. I’ve spent some time with you on the confusingly named HTC Windows Phone 8X, which is a terrific phone: It’s super-slim, attractive, fast, and has a battery that goes for days. I like it a lot.

If I weren’t already an AT&T customer, I’d be happy to give you another try on the Windows Phone 8X, which will be offered to AT&T customers soon for $99 plus a two-year contract. That seems like a good deal. Except I’m not eligible for it. Because I signed on with a two-year contract for a subsidized phone, and that phone is now my HTC Vivid, I’m stuck until October of next year, it appears.

Even if I still had that Lumia 900, I still wouldn’t get Windows Phone 8, because none of the older models are upgradeable.

I’ve talked to AT&T. I’ve begged, pleaded, and spoken to supervisors. But no one is budging. I signed a two-year commitment to get to you, but what I got, in reality, was AT&T — because that’s the way subsidized contracts work in the U.S.

So, Windows Phone 8, I’ve got to break it to you: AT&T is not your friend. It’s what’s keeping me from you right now.

For that matter, Verizon probably isn’t your friend either. I’m not sure there’s a carrier in the country that will put you first, not when iPhones sell so quickly and Android phones come so cheaply. And that’s a problem.

Since you’re coming from way behind iOS and Android, you’re going to need all the friends you can get. I don’t know where you’re going to find them. Big companies that want to standardize on Windows? People like me who are bored and annoyed with Android? They all seem like a stretch.

Your best best, in all likelihood, is Windows 8, which promises to link you with tablets and PCs in one, consistent interface, all sewn together with the surprisingly useful Skydrive service. For your sake, let’s hope that works, because right now, you need a lot of help.

A pretty face that makes people smile is a good start, but it’s not enough.