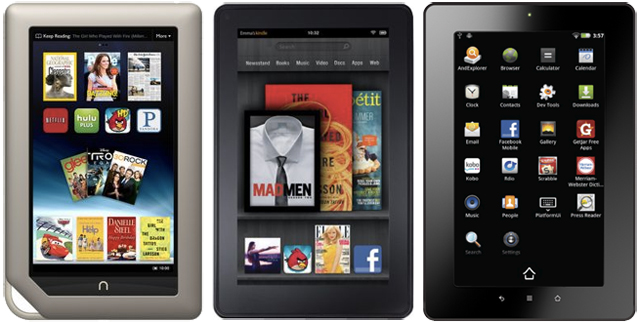 They have a lot in common. Both are 7-inch, sub-$300 Android tablets, and both are shipping in time for the holiday shopping season — the Kindle Fire on Nov 18 and the Nook Tablet on Nov 15. And both could face a bit of competition from the Kobo Vox e-reader, the freshly discounted Nook Color, and the higher-end iPad 2. For the most part, however, it’s going to be Barnes & Noble versus Amazon.

Speed: The Kindle Fire and Nook Tablet have 1GHz dual-core processors, but the Nook is packing more RAM — it has 1GB compared to 512MB of RAM on the Kindle Fire, Nook Color and iPad 2. But specs don’t tell the whole story, and we’ll have to wait until we can test the tablets side-by-side to declare a victor on speed. One advantage the Kindle Fire has is that it’s running the Amazon Silk web browser with is optimized for faster page loading.

Memory: The Nook Tablet has twice the amount of on-board memory as the Kindle Fire, with 16GB to the Fire’s 8GB. Like the Nook Color and Kobo Vox, the Nook Tablet’s memory is expandable up to 32Gb with a microSD card. Both offer free cloud storage, the Kindle Fire through Amazon Cloud and the Nook devices with Nook Cloud. The Kobo Vox also offers unlimited e-book cloud storage.

Content: Amazon and Barnes & Noble both have huge libraries of book and magazine content to offer tablet customers. Only Kindle users will have access to Amazon’s new book lending feature. The Nook Tablet is shipping with Hulu Plus, Netflix and Pandora pre-installed, and includes free trials so users can test the services out. Unlike Amazon and Apple, Barnes & Noble isn’t selling movies, music or other non-reading media directly through its devices. Those items can be still be purchased through third-party apps, but the Nook line is focused on reading material for now.

Design: Since the devices are mostly screen, the tablet wars aren’t going to be fought on the basis of physical design, but rather their user interface. Except for the iPad, all of these e-readers have 7-inch, 1024-by-600 pixel screens. Weight and thickness matter, but in this case the Nook Tablet is just .5 ounces lighter than the Fire — not a make it or break it amount. The Nook Tablet still has the line’s trademark metal hook in the bottom corner, should you fancy using it as an enormous keychain.

Support: In a move inspired by Apple’s incredibly successful Genius Bar customer service approach, Barnes & Noble is using its retail locations to provide free Nook support to all customers. It will also offer free Wi-Fi at its stores.

All these tablets are currently available for pre-order. Here’s a closer look at the specifications of the e-readers competing for your attention this holiday season: