When hotels receive satisfaction feedback from their consumers, it usually isn’t pretty. After the guest is gone, the hotel can’t do anything to make them happy, and the inevitable negative reviews find themselves posted to sites such as Yelp. But Eco Consumer Services plans to make it easy for hotels to get consumer feedback while the guest is still in the hotel. 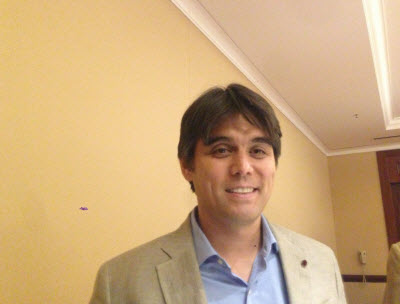 The Singapore-based Eco has enlisted artificial intelligence, QR codes, mobile messaging, and simple voice recordings to make it easy for consumers to leave feedback for hotels, restaurants, or any other service. The service will transcribe messages and make them easy for hotel managers to analyze and respond to — while the guest is still in the hotel. They can then interact and follow up, offering discounts or other amenities that will turn the negative review into a positive one.

“If there are 10 negative reviews on social media, you can track that, but you can’t change that,” said Ken Weimer, chief executive of the company at a reception for our MobileBeat 2013 conference this week in San Francisco. “There are still going to be 10 negative views out there on the Internet.”

The hotel operator can leave its own comments, but sites like TripAdvisor exist because people don’t trust what the operator has to say. And the operators say they don’t understand why the customer doesn’t just tell them directly. Weimer said it’s because the hotel doesn’t try hard enough to get those comments in the first place. When you get a survey at the end of your stay, it often asks too many questions.

“It’s too late at checkout, and it’s too cumbersome,” he said. “Nothing impacts what happens on the Internet as [much as] what actually happens within the four walls of the hotel. The Internet is like a truth finder. Let it happen. Instead, get the feedback inside the hotel.”

With its customer feedback management software-as-a-service, Eco crawls the web on a daily basis to hunt down reviews about an establishment. It leaves the paper-based QR codes in hotel rooms and elsewhere. The guest scans the code and then types in the feedback and hits send.

Eco found that consumers won’t download a hotel app, so it simply uses a code that takes them to a web site where they can type in a message via their phone. It doesn’t use forms and simply uses a single text field for the response.

In exchange for the guest’s participation, the hotel may offer ae message for the hotel. Eco transcribes the message and presents the feedback as part of a dashboard of messages. It uses artificial intelligence to detect the “sentiment” of the message and then color codes it so that negative feedback can immediately be spotted on a web-based dashboard. free dessert in its restaurant or make a donation to a charity. Guests can also dial a three-digit code and leave a voic

The hotel can also build a database on a customer and use that feedback to make the consumer happy on the next stay. If the consumer says the Wi-Fi charges are too high, the hotel can offer a discount on the Wi-Fi. If a voice message is hard to transcribe, Eco sends it out to Amazon Mechanical Turk, which crowdsources the transcription job. Instead of costing $1.50 for a transcription, the cost falls to 7 cents. About 61 percent of the feedback comes in the form of speech, especially from older consumers.

Founded in 2011, the company already has such customers as DoubleTree, Holiday Inn, and Radisson. It has restaurant chains and FMCG brands in several regions. Weimer said that hotels using his service are seeing their online reputations go up, and they’re getting more positive reviews.

The company has $750,000 in funding from the Infocomm Development Authority of Singapore, and it expects to seek another round. Eco has targeted hotels and restaurants first. But it hopes to extend the service to car rentals, clinics, hospitals, public institutions, and other services. The Ministry of Health in Singapore has signed up Eco to use it in public hospitals. Eco charges anywhere from $380 to $1,500 a month, depending on the type of customer and services. Eco has 10 employees.