Vator.tv, the site best-known for allowing entrepreneurs to record “elevator pitch” videos, has been testing a new way for entrepreneurs to promote their companies — a micro-blogging news feed.

I’m not sure if this feature adds much to services that are already out there. After all, any company can publish its own blog; if it wants to send out shorter updates it can sign up for an account on micro-blogging site Twitter. Vator’s “Company Updates” feed falls somewhere between the two models. It looks like messages are limited to a 280 characters, which is twice as long as the maximum length of a message in Twitter, but much shorter than most blog posts. Vator users can “follow” companies, as in Twitter, and see all the updates aggregated on a single page, but you comment on each message as if it were a normal blog post.

Vator and the startups who have tested the micro-blogging feed say it offers a more interactive way to communicate. Many of the updates I saw last night tended to be a little more in-depth than what you’d find in Twitter, but much more digestible than a long list of posts. Plus, you’re probably communicating with a more startup-centric audience than you’d find on Twitter. It’s a small distinction, but the feed definitely enriches Vator’s offerings. And the site’s traffic has already been growing this year, according to data from Compete.

Vator raised an $1 million angel round earlier this year, following a round of the same size in 2007.

Speaking of Vator, the company also organized a mobile application contest with mobile advertising company Smaato. The two companies just announced that DialPlus, a San Diego startup that shows relevant information from the web before, during, and after a call, was selected from the more than 100 ad-enabled apps that entered the contest. As a result, the startup will get a free booth at the Mobile World Congress in Barcelona next year. 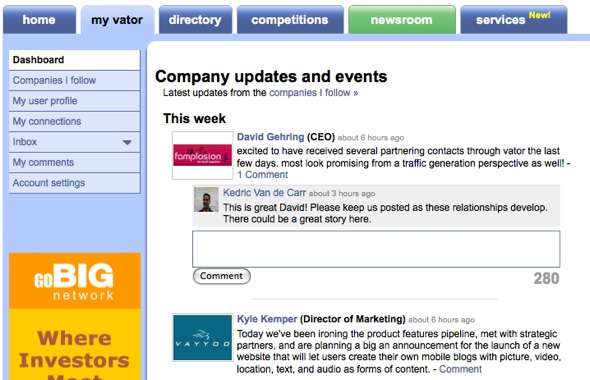