Encrypted email service ProtonMail is doubling down on its privacy credentials today with the news that it will now allow users to connect their email accounts through the Tor network.

Founded out of CERN in Switzerland back in 2013, ProtonMail launched globally last year with the promise of client-side encryption, meaning that all data is encrypted before it arrives on the company’s servers. A few months back, the company added two-factor authentication (2FA) to its service for added security.

The Swiss startup now claims around two million users globally, and in response to a growing risk of government-backed blocking of encrypted services, ProtonMail is looking to future-proof itself for those seeking unhindered access to their email accounts by supporting Tor. 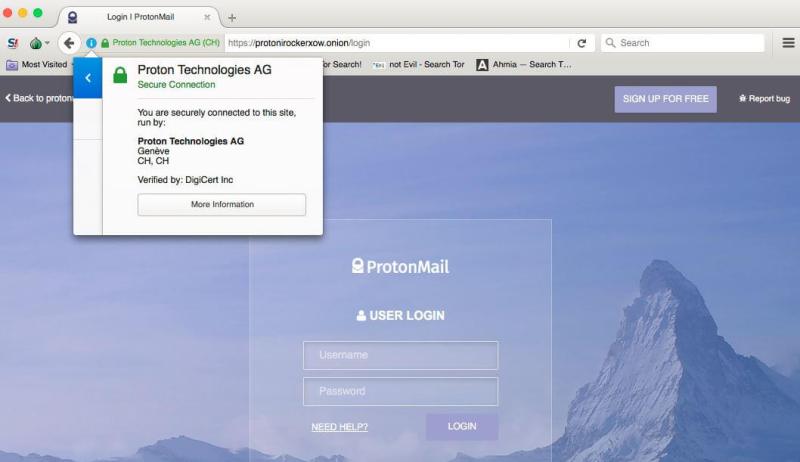 Tor, an acronym of “The Onion Router,” is software that directs traffic through a network of relays and is typically used by activists or journalists living under the watchful eye of strict government regimes. However, it can be used by anyone seeking anonymity online, and a number of big-name companies have turned to the technology, including newspapers protecting whistle-blowers from detection. Back in 2014, Facebook revealed it was switching on anonymous access through Tor, and, as of last April, one million people were connecting to the social network through Tor each month.

With Donald Trump soon entering the White House as the 45th president of the U.S., and a growing awareness of privacy, due to high-profile hacks and government programs, there has been a surge in sign-ups for online privacy tools, such as VPNs and encrypted messaging services. In the aftermath of Trump’s election victory, ProtonMail reported that sign-ups doubled.

In December, Privacy-focused messaging app Signal was targeted by governments in Egypt, United Arab Emirates, Oman, and Cuba, and the company behind the app turned to a technique called domain fronting to circumvent the censorship. Tor uses a similar technique, and it’s something that other encrypted services may have to consider moving forward. ProtonMail hasn’t suggested that it has been targeted as of yet, but this is more a way of future-proofing itself for if — or when — that happens.

“Given ProtonMail’s recent growth, we realize that the censorship of ProtonMail in certain countries is inevitable, and we are proactively working to prevent this,” explained ProtonMail cofounder Andy Yen. “Tor provides a way to circumvent certain internet blocks, so improving our compatibility with Tor is a natural first step.”

ProtonMail’s onion site can be accessed here (https://protonirockerxow.onion), and was developed “with advice” from the Tor Project. Additionally, it’s only being made available with HTTPS, for added security.

Today’s news comes a day after ProtonMail revealed how it was going to grow its service globally, with plans in place to crowdsource translations using a community of volunteers to convert the platform into their chosen tongue. And with a growing international user base, the issue of online privacy will likely increase in tandem.