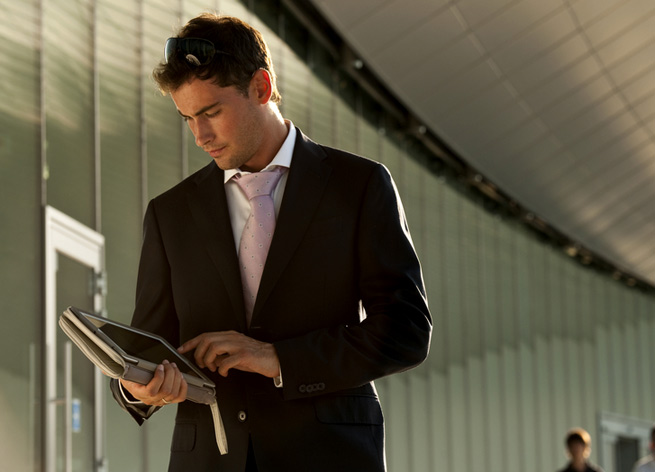 Mobile design has never been more important than it is now. Just this week, we saw Apple — one of the world’s most profitable companies — bet that a new design for iOS 7 would appease fans and analysts who claim Apple isn’t innovating like it should on the mobile front.

Apple may not have won over the public on iOS 7 just yet, but its commitment to mobile design remains unquestionable. Other companies are in the same situation, and not just consumer-facing firms. Businesses that target enterprise-class customers are also pushing hard to make mobile design a priority. Because employees are increasingly adopting slick consumer apps, there’s good reason for businesses to make their apps just as inviting.

At our upcoming MobileBeat 2013 conference, we’ll be exploring the “consumerization of the enterprise” and how that relates to the mobile experience. In the realm of consumerization, we’d argue that one of the biggest shifts (if not the biggest) is the push to make friendly enterprise mobile applications for iOS, Android, and the mobile web.

When it comes to design, it’s easier to show rather than just tell. We’ve spotlighted three popular enterprise companies that are prioritizing mobile app design and elegant mobile access: 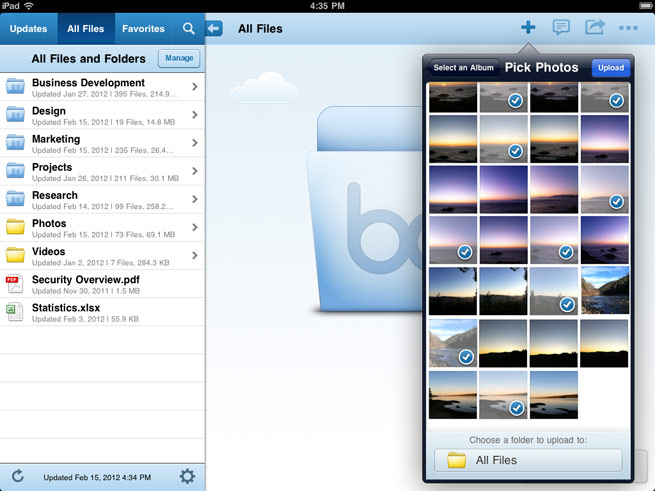 Enterprise cloud storage and collaboration hotshot Box boasts a young, charismatic CEO with lots of ideas. But one major thing that Aaron Levie espouses is the power of mobile access for your content.

More than 50 percent of the company’s customers use Box on mobile devices, so it has to be vigilant in this arena. With its apps, customers are able to access and create documents, notes, photos, and more with very few taps on their phone or tablet screens. Box has apps for iOS, Android, BlackBerry 10, Windows Phone, and Windows 8.

Recently, Box showed that it wasn’t completely satisfied with its mobile experience. It acquired Folders, a French app that made file-sharing using Box, Dropbox, and Google Drive especially simple on iOS. The app comes from mobile guru Martin Destagnol, who is now a “technical adviser” for Box and is working to integrate his tech and ideas into the company’s applications.

Destagnol told VentureBeat that he was happy to join the team and has ambitions to make Box’s iOS app better. His priorities: making document previews faster, creating better ways to share content, and simplifying collaboration.

“Apps need to be useful but you also want to enjoy using them,” Destagnol said.

If there’s one element Destagnol is prioritizing over anything else, it’s speed. As you can imagine, the capability to access things fast is incredibly important to business users. Imagine being in an elevator or at a short meeting and needing to show an impressive slide. If that doesn’t happen quickly, you may blow the sale.

“You can’t wait 20 seconds to open a slide,” Destagnol said. “If it takes more than 20 seconds, you’ll never open the app again.”

Of course, Destagnol says all the features that are already included with Box will remain in the iOS app — security, collaboration, accessibility, etc. — but he just wants to do it better. He’ll be moving from France to the Bay Area to work directly with the Box mobile team in the near future.

We will get to see Destagnol’s ideas implemented in the next big release of the iOS application, which will likely debut at the Boxworks 2013 conference in September. 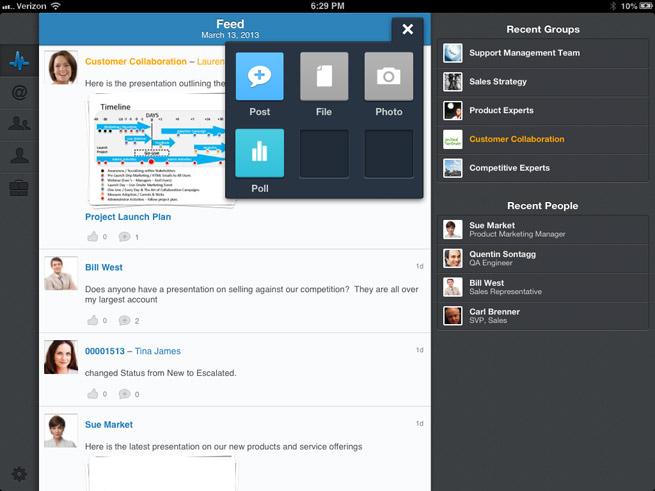 Salesforce: Our Chatter design is better than Facebook’s

When you think of enterprise companies that loudly spotlight mobile apps, Salesforce.com is one of the big names that comes up. Outspoken Salesforce CEO Marc Benioff has spoken exhaustively about the power of mobile — but he’s always been a fierce trendsetter, so we still listen carefully.

With native mobile apps available for many of its services, including Chatter, Work.com, Salesforce Touch, ForcePad, and more, Salesforce shows it wants to own the mobile enterprise. (It should be noted that reviews on some of its apps are mixed but good on others.)

The company’s best example of mobile design done right is Chatter, its enterprise social network that competes with Yammer, Jive Software, Tibbr, and others. Chatter’s mobile apps were revamped in March and added features like polling and the editing Salesforce data inside the app.

Peter Coffee, a VP and head of platform research at Salesforce, told VentureBeat that he actually thinks Chatter’s design is so good that it’s “better than Facebook.”

So what specifically makes the design of Chatter and other apps so good? Coffee says Salesforce cares about supplanting old models of getting work done. Data access is there but you also get to manage conversations easier with fellow employees and customers.

“For the past 40 years, people have defined user interface by how well you could approximate handling documents on a desktop,” Coffee said. “We are turning that model inside out — we are designing the model around the concept of a feed. Questions are asked, answers are given, actions are taken. Content becomes beads on the string of conversation and action instead of content being the center and action being around the edge. … The conversation needs to be the axis around which everything is centered.” 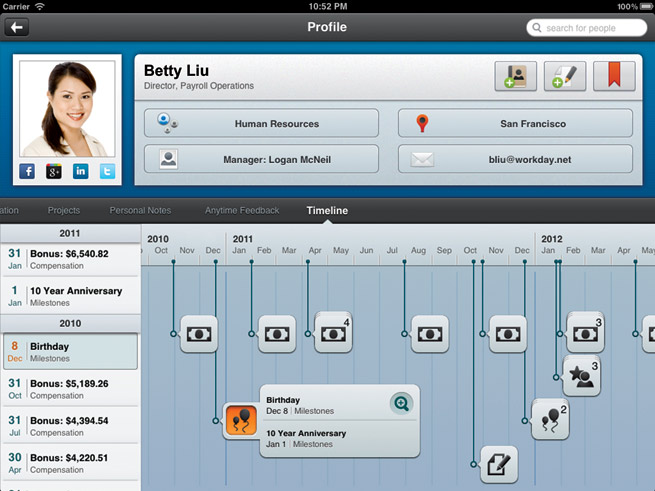 If there is any company that has dominated in the past year because of its consumerized vision for enterprise apps, it might be Workday. It offers what might be considered “boring” enterprise apps for human resources and finance. But it took the approach of offering these apps exclusively through the cloud and across mobile platforms. And it wanted to make them more friendly to use than traditional legacy software.

That dedication helped lead the company to a spectacular IPO last October. And it hasn’t stopped innovating.

Joe Korngiebel, Workday’s VP of mobile and innovation, told us that its broad set of users is one of its biggest considerations in mobile. Some of Workday’s largest customers actually deploy Workday to every employee. In the case of Singapore’s Flextronics, for example, that’s more than 200,000 with access to Workday in the browser or on mobile.

Naturally, people given access to these apps on their phones and tablets range from casual to power users and from old to young. That means simple design wins out above almost all else.

“We can’t slant [toward younger crowds] like an Instagram can,” Korngiebel said. “Our audience is very broad and spans age demographics and different industries.”

Korngiebel also said that the apps need to be designed in such a way to mimic desktop-based functions but approach differently. For example, the organizational chart Workday provides for each customer would be a mess on mobile if it was presented like it was on the desktop.

If the desktop experience was ported straight to mobile, “you would be pinching and zooming to find a manager,” Korngiebel said. “Instead, on mobile, you swipe up, down, left, or right to see who is above, below, or at your level on the chart.”

A new redesign of Workday’s mobile apps will arrive in either October or November.

It’s all about simplicity, speed, and power

Box, Salesforce, and Workday are clear in their mindsets — if your mobile apps aren’t designed well enough, people won’t use them. And if you can’t get people to use your mobile apps, how the hell would you convince a customer move to your service from legacy software?

The next generation of enterprise apps need to be easy-to-use and speedy while still retaining powerful functionality. All it takes some ingenuity on behalf of mobile teams that can build for less screen space and less power than a desktop or a laptop provide. And these teams need to be thinking about touch as well with larger buttons and the ability to swipe and tap icons.

“You have to make sure mobile apps are powerful like the desktop but built specifically for each form factor,” Korngiebel said.