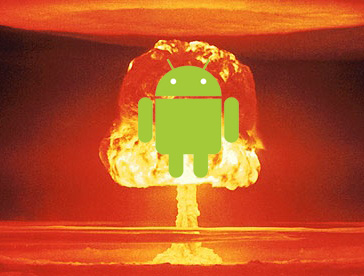 Apple’s patent victory over HTC’s Android phones isn’t winning it many friends, especially not from Google.

“The big news in the past year has been the explosion of Google Android handsets and this means our competitors are responding,” Schmidt said, speaking at Google’s Mobile Revolution conference in Tokyo. “[T]hey [Apple]are not responding with innovation, they’re responding with lawsuits … We have not done anything wrong and these lawsuits are just inspired by our success.”

Schmidt went on to say that Google would support HTC’s patent fight against Apple and also mentioned that he was confident of a win.

We’ve sent an inquiry to Google about Schmidt’s comments and will update when we hear back.

Last week, an ITC judge ruled that HTC’s Android phones infringed on two Apple patents, something that could potentially force HTC to pay royalties to Apple. Taken to an extreme, it could also mean that HTC would have to stop selling Android devices in the US, and it could potentially have an effect on Android devices from other manufacturers. HTC appealed the decision, but we won’t know what the ITC will decide until the end of the year.

HTC is already paying licensing fees to Microsoft for every Android phone it sells, a strategy that seems to be paying off quite well for Microsoft. Paying out additional fees to Apple could end up being a major hit to HTC’s revenues, but it’s certainly better than some alternative outcomes.

Apple’s patent win over HTC also seems to have sparked concern among Chinese smartphone phone makers as well, so much so that they’re considering jumping over to Windows Phone 7, Digitimes reports. That’s potentially a sign that other companies may start having second-thoughts about adopting Android, so Google needs to make sure it squashes this patent squabble sooner, rather than later.