Europe’s “app economy” is still growing robustly and is expected to reach $16.5 billion in 2014, but its share of the global market has fallen to 19% in 2014 from 24% in 2012, according to a new research brief published by London-based Vision Mobile.

Vision Mobile expects app revenue in European Union nations to grow to $16.5 billion this year, compared to $13 billion in 2012, which is the equivalent to a 12% annual growth rate. But the app economy’s global growth of 27% is double what the EU is seeing. 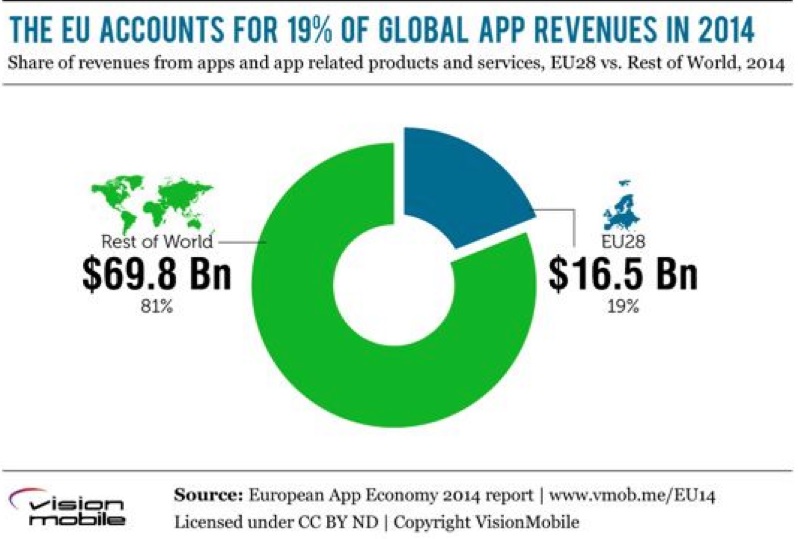 It’s not like Europe’s app economy is stagnant — it’s growing quite well, and some people are even having a bit of trouble keeping up with demand. But the markets in Asia are growing much faster, so if European mobile tech companies want to contribute more, they will need to focus more on Asia, according to the report.

Asia accounted for approximately three times as many smartphone sales as Europe in 2013, with a large share of sales to new users. India and China alone are expected to add over 400 million new smartphone users in 2014, according to Vision Mobile. This is the kind of momentum that fuels the app marketplace.

Despite these challenges, the EU app economy is robust and in some ways stretched, as a shortage of developers limits potential. “Demand outstrips supply with every self-respecting CIO or brand manager commissioning their own apps,” says the report.

Some other findings of the report: