Over the last few years, cloud-based services like Google Drive and Evernote have changed the way people create and collaborate on documents. But it’s doubtful a major government agency, health care vendor, or financial institution would endorse those products as secure.

Huddle wants those organizations to use Huddle Note. 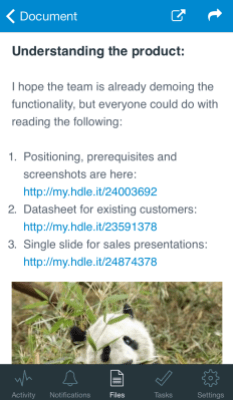 Above: A screenshot of Huddle Note on iPhone

The San Francisco, Calif.-based company, which bills itself as a content collaboration platform for enterprises, just unveiled its notes feature as well as a redesigned app for iOS 7. Together, they enable Huddle users to create, edit, store, and collaborate on content across desktops and iOS devices.

“It’s easy to roll out Gmail and Google Drive with it, but when you start to get into government documents or other sensitive information, you just can’t use Google Drive — but you still want to create this lightweight content.”

Huddle has racked up an array of security-conscious customers, including 80 percent of the Fortune 500, the U.S. Department of Defense, and a sizable chunk of the U.K. government. Beyond the standard enterprise- and government-level security measures, the company lets its customers decide whether to host their data in the U.S. or Europe — and it plans to build out more international data centers so it can offer additional data domains soon.

Like Huddle’s other offerings, Huddle Note comes with audit trails, version control, approval management, and enterprise-grade security. But unlike the notes app from Box, which debuted (as a beta) in September, it doesn’t enable users to co-edit documents in real time — although that feature is “definitely on the roadmap,” according to Mitchell. And although Huddle Note will eventually come to Huddle’s Android app, don’t expect that any time in the next few months.

Huddle has grown “well over” 100 percent year over year, added Mitchell, noting that the recent Tibbr partnership has led to a few major deals. The team’s biggest challenge right now is keeping up with that demand.

“We’re adding servers and capacity as fast as we possibly can to keep up,” he told us.

The company raised $24 million in May 2012, bringing its total funding to $40 million — and it expects to raise more soon.

“We have plenty of people offering us money right now,” said Mitchell. “We’re delighted to have that problem.”

Founded in 2006, Huddle is headquartered in San Francisco with offices in London, New York, and Washington D.C.