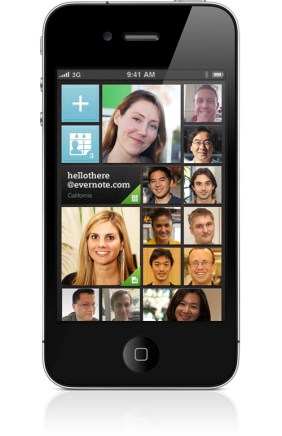 In its grand quest to help you remember just about everything, note-taking startup Evernote today launched two free new iPhone apps, “Food” and “Hello,” which will let you better keep track of great meals and people, respectively.

Both apps are still tied to the existing Evernote service — entries are synchronized and viewable from any device that can access Evernote — but they offer useful bits of functionality suited specifically to their purposes.

Evernote Hello, for example, is built around your encounters with new people. The app taps into the way our brains naturally remember people by focusing on faces, time, and context. It certainly sounds more useful than just trading business cards with people you’ve just met, especially for people who typically have trouble remembering new faces, like this reporter.

Instead of a boring list of contact info, the Hello app displays an attractive list of faces. To add a new person to the app, you can either hand over your phone to let the person take a photo (using your phone’s front-facing camera) and add in their contact information, or take a photo and add in the details on your own. The app takes four quick photos of the person, which it uses to create simple animations on its home screen.

Once on the app, you can add an Encounter with the person, which basically is a quick note of when and where you met up. The Hello app is smart enough to display relevant notes from Evernote or the Food app when viewing particular contacts, Evernote says.

I love the concept of the Hello app, though it’s certainly going to be a bit awkward to take photos of people you’ve just met. It may be a bit more efficient, and less awkward, for Evernote to implement contact sharing technology similar to what Bump offers, which lets you trade profiles with people by holding your phones near each other. Still, I can see the value in Evernote’s approach, since it doesn’t require other people you’ve met to set up the app, or even have smartphones.

The Evernote Food app takes a similar approach to charting the meals you’ve had with friends and family. You can create individual meal entries, take photos and notes, and also easily share entries to Twitter and Facebook. It sounds particularly useful for keeping track of new recipes, or documenting a foodie road trip.