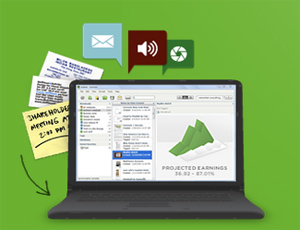 Evernote made our list of “10 disruptive cloud companies we’re excited about” because the company has taken to solving the simple problem of effective note-taking in an innovative, cloud-based fashion. Just yesterday, the company launched two free iPhone apps, “Food” and “Hello,” which help you better keep track of meals and people.

Back in June, Evernote reached 10 million registered users, with more than 400,000 of those paying $5 a month for a premium plan that enables larger uploads and better collaborative tools. It’s unclear how many of the current 20 million users are paying, but Libin did say that about 27% of users who continue to use the service for 40 months pay for it.

Mountain View-based Evernote has raised $95.5 million in total funding to date, with a massive $50 million round in July led by Sequoia Capital with participation from Morgenthaler Ventures. Evernote became a profitable company 6 months ago, but due to recent hiring and expansion the company is now back in the red. Libin expects the company to go back to black soon.