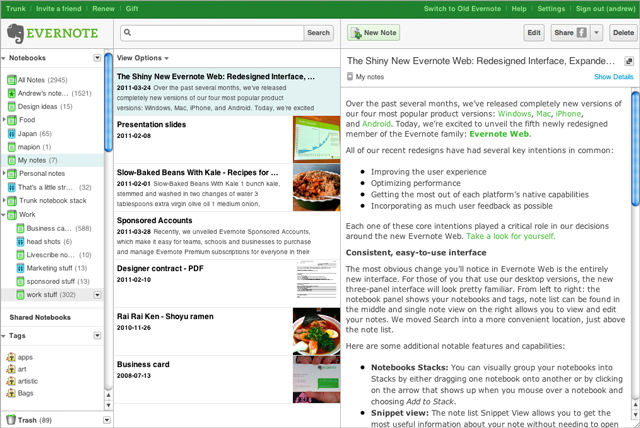 Popular memory-aid service Evernote says it’s been upgrading all of its different products in the last few months, including its iPhone, Android, Windows, and Mac applications. Today the company is unveiling a revamped Evernote website too.

The fact that Evernote launched the new website after taking care of its other products should give you some sense of where the site stands in the company’s priorities. I really think of Evernote as a mobile application for storing notes, pictures, and more, and I’m only vaguely aware of the other versions. The company acknowledges that it tackled the other apps first because they’re “our four most popular product versions.”

So what’s new? Well, there’s a new three-panel interface, which apparently comes from Evernote’s desktop versions. There’s also a new capability that Evernote plans to add to its other versions — the ability to share individual notes over Facebook, email, and instant messenger. Previous sharing capabilities were focused on team collaboration, specifically sharing an entire notebook, while the new feature is more flexible. Now every note will include a share button that allows both social sharing of individual notes and team notebook sharing.

Other new features include the ability to create notebook stacks, a snippet view of notes, saved searches, and auto-saved.

Evernote has raised around $45 million in funding from Sequoia Capital, Morgenthaler Ventures, DoCoMo Capital, Troika Dialog, and others.