Facebook has answered the pleas of millions of mobile users with the release of a new application for iOS. The social network has finally addressed the most glaring issue of the company’s iPhone and iPad applications: speed. 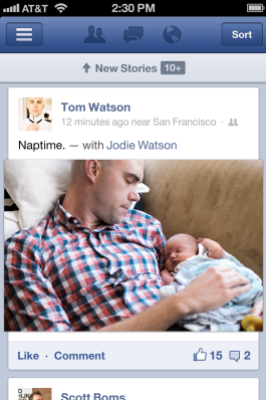 Facebook 5.0 for iOS dropped on the App Store today, and the new version amounts to a complete do-over. The application looks essentially the same, but it’s now twice as fast in three areas: launching the app, scrolling through the News Feed, and opening photos in feed.

“As you scroll down your news feed, all your friends’ stories appear faster than ever. A banner lets you know when new stories come in, and you can tap once to immediately see the latest updates,” iOS product manager Mick Johnson said in a blog post on the update.

The photo opening experience has been transformed from painfully slow to nearly instantaneous. Users can now tap a photo to open it right away and pull down to close the photo just as quickly. Notifications should now also load just as swiftly.

Perhaps now the Facebook experience on iOS devices won’t be an exercise in  patience. Should that prove to be the case, the social network will have a far better opportunity to monetize its mobile service, as members would be more likely to engage with Sponsored Stories and application ads.