Facebook is moving beyond peer-to-peer payments in Messenger with the addition of group payments. Now you don’t have to pay your friends individually, just tap on the plus sign in the bottom left-hand corner of a group conversation, select the payments icon, enter the amount per person or the total sum to be divided evenly, and that’s it.

Payment support first arrived on the popular chat app in 2015, but it only let you do one-on-one transactions, which is good for lunch meetings, purchasing tickets, and more. Now Facebook has extended its existing infrastructure to accommodate groups.

Facebook isn’t the first to facilitate money exchanges  — you can also do so through PayPal, Venmo, and Square Cash, among others. But as people are already conversing within Facebook Messenger, some may prefer to keep the entire history of record for their friendship in the app. 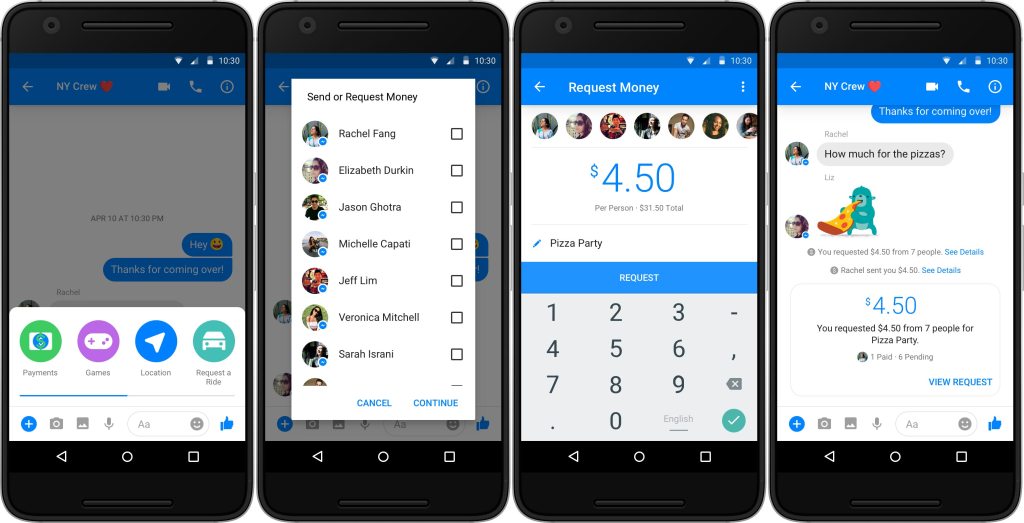 We’ve all been in group situations where it’s difficult to figure out how much everyone owes, be it at a restaurant where we’re splitting the bill or when we’re purchasing a birthday present, buying tickets to an event, or sharing transportation.

What’s interesting about Facebook’s solution is it lets you see who has paid within a group conversation — and you can always request details in full screen.

At this time, the company doesn’t plan on opening up payments to developers, and you can’t currently pay businesses through the app.

How much has been transacted through Messenger in more than two years has also not been revealed, but this isn’t the only update Facebook has made. Previously it has enabled bots to accept payments and added a chat assist feature to intelligently predict when you might want to send someone money within a conversation.

Group payments is only available for those in the U.S. at this time.