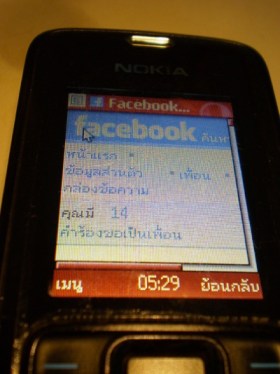 Facebook said its users are increasingly using mobile devices, and that this is risky because the social network still hasn’t figured out how it can make money from mobile ads.

A majority of Facebook users still access the site on their personal computers, where Facebook makes a lot of money from ads served on its web pages. However, increasingly, more users are going mobile (indeed, 425 million of them and counting), partly because of Facebook’s own encouragement. And there, Facebook makes no money.

The statement came in Facebook’s paperwork filed with the Securities and Exchange Commission today, which signaled the company’s intent to start selling its shares to the public. It came in a portion of the filing called “risk factors,” which is where a company warns investors of the risks entailed in buying its shares. A lot of these warnings are boilerplate stuff, and aren’t supposed to be taken as red flags, per se. But it’s noteworthy that Facebook lists mobile so highly on the list. It’s on the third of about 20 pages of risks, coming just under the obvious big generic risks about advertising revenue trends, and whether Facebook will be able to retain users amid competition.

Facebook has not started serving display advertisements in its mobile offering, in part because ads are considered by Facebook to be disruptive to the user experience. At the same time, Facebook has actively encouraged users to go mobile with Facebook, and has pumped resources into perfecting their mobile apps — presumably because it its wants to keep users as engaged as possible, wherever they go.

Facebook said its mobile effectiveness will depend on other players, such as Google and Apple, who control the most popular mobile operating systems. As a result, some popular phones may not feature Facebook prominently, Facebook warned.

Facebook referred to other areas, such as “systems, networks and standards,” where competitors may wield control over how Facebook is used. More broadly, Facebook said, it competes heavily with Google+, and also with other, largely regional, social networks that have strong positions in particular countries, including Cyworld in Korea, Mixi in Japan, Orkut (owned by Google) in Brazil and India, and vKontakte in Russia. While Facebook refers to these as competitors not just in the mobile arena, its true that these players could exercise control over mobile products too, if they strike the right deals with manufacturers and carriers.

Below is the actual text Facebook uses in its IPO filing:

Growth in use of Facebook through our mobile products, where we do not currently display ads, as a substitute for use on personal computers may negatively affect our revenue and financial results.

We had more than 425 million MAUs who used Facebook mobile products in December 2011. We anticipate that the rate of growth in mobile users will continue to exceed the growth rate of our overall MAUs for the foreseeable future, in part due to our focus on developing mobile products to encourage mobile usage of Facebook. Although the substantial majority of our mobile users also access and engage with Facebook on personal computers where we display advertising, our users could decide to increasingly access our products primarily through mobile devices. We do not currently directly generate any meaningful revenue from the use of Facebook mobile products, and our ability to do so successfully is unproven. Accordingly, if users continue to increasingly access Facebook mobile products as a substitute for access through personal computers, and if we are unable to successfully implement monetization strategies for our mobile users, our revenue and financial results may be negatively affected.

Facebook user growth and engagement on mobile devices depend upon effective operation with mobile operating systems, networks, and standards that we do not control.

There is no guarantee that popular mobile devices will continue to feature Facebook, or that mobile device users will continue to use Facebook rather than competing products. We are dependent on the interoperability of Facebook with popular mobile operating systems that we do not control, such as Android and iOS, and any changes in such systems that degrade our products’ functionality or give preferential treatment to competitive products could adversely affect Facebook usage on mobile devices. Additionally, in order to deliver high quality mobile products, it is important that our products work well with a range of mobile technologies, systems, networks, and standards that we do not control. We may not be successful in developing relationships with key participants in the mobile industry or in developing products that operate effectively with these technologies, systems, networks, or standards. In the event that it is more difficult for our users to access and use Facebook on their mobile devices, or if our users choose not to access or use Facebook on their mobile devices or use mobile products that do not offer access to Facebook, our user growth and user engagement could be harmed.