As promised, Facebook today opened up its Instant Articles offering to all publishers, allowing anyone to import their content into the social network and add it directly to a user’s News Feed.

The company said that adoption has been “tremendous” with more than 1,000 publishers worldwide. “We see clear evidence that Instant Articles provides a better reading experience for people and a significant boost for publishers looking to reach their audiences on Facebook,” wrote product manager Josh Roberts. 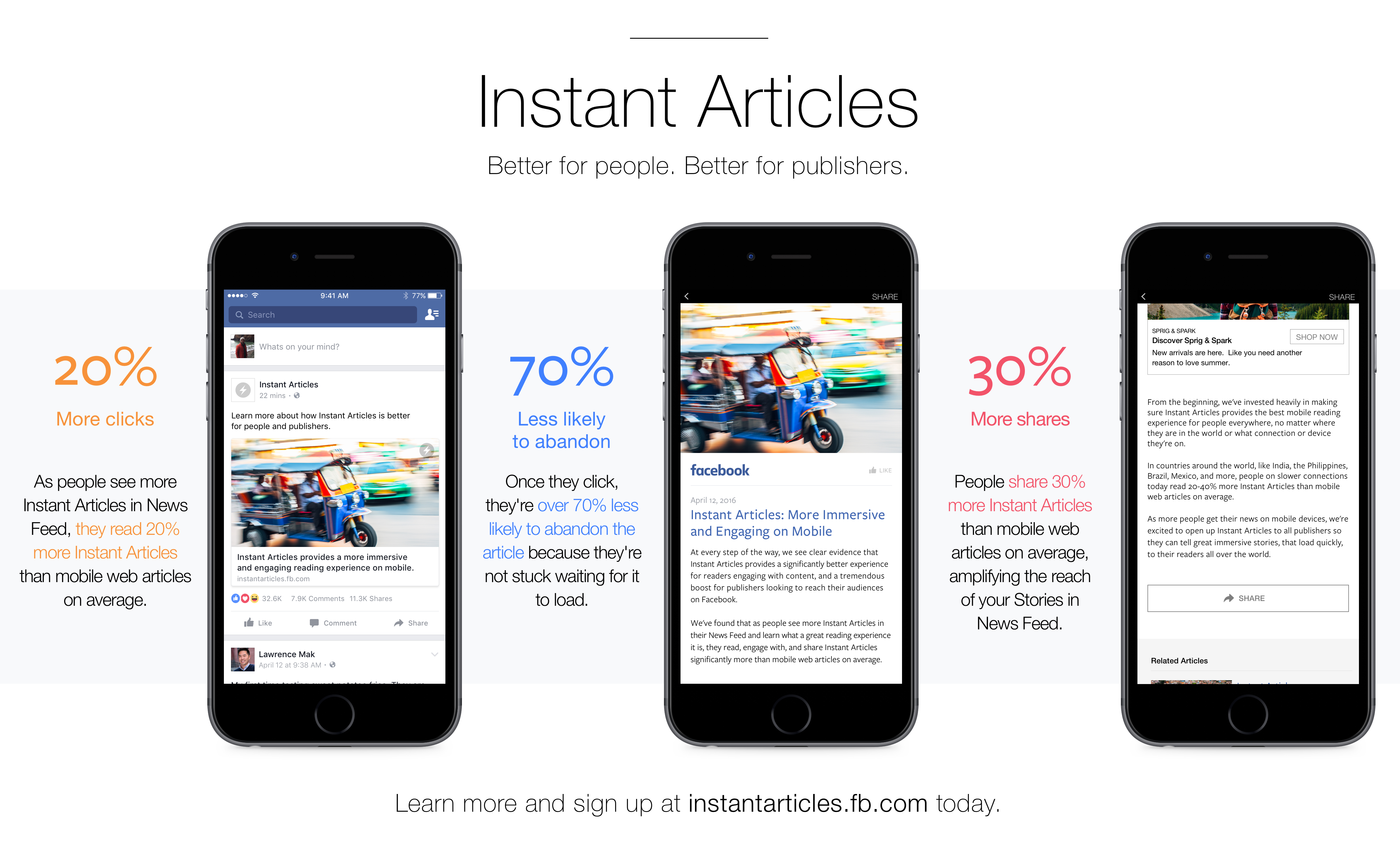 Branded content is also coming to Instant Articles. The company said that a tag will accompany these sponsored posts, and that publishers can additionally use three more ways to mark such content:

Opening up Instant Articles to all publishers gives Facebook an edge over Google, which has launched its own initiative called the Accelerated Mobile Pages project. Both efforts are designed to avoid slow browser load, but Google’s is open-sourced, meaning that other services like Twitter can use it. However, perhaps one of Facebook’s biggest advantages is the social aspect, where you can read an article within the social network and share it right then and there.

Trevor Paulsen, product manager for Adobe Analytics, told VentureBeat, “Time will tell as to whether Facebook or Google’s solution will be more widely adopted. It’s essentially a question of who gets more traffic — Facebook’s app, or Google’s search engine on mobile Web. We see this as an epic app vs mobile Web battle; Facebook wants to keep you in their app, whereas Google wants you in the mobile Web — both for their share of advertising. Publishers will want to implement both to see which is more impactful to their business.”

“In all, we applaud the intention to create faster mobile experiences — the faster an article loads, the more engaging and relevant it becomes,” he continued. “These days, consumers have very little patience. A recent study commissioned by Adobe showed that if digital content takes too long to load, 78% of respondents would switch or stop altogether. Capturing a reader on a mobile device is determined in the milliseconds.”

In February, Facebook announced the public debut of Instant Articles, which seeks to streamline the way people consume content on their mobile device. This feature first launched last May, when only a select group of publishers had access, including The Atlantic, BBC News, BuzzFeed, The Guardian, National Geographic, NBC, The New York Times, and Spiegel Online. Prior to today, Facebook claimed that a “few hundred publishers” have been onboarded.

Some publishers may wonder if Instant Articles simply allows Facebook to cannibalize their content, but that’s not how it works. Publishers can bring ads that they’ve sold into the product and keep 100 percent of the revenue. Facebook’s system will track the data on the ads served through its Audience Network or publishers can use their own offering.