Four years ago, the company formerly known as Snapchat turned down a $3 billion acquisition offer from Facebook. Since then, Facebook has made numerous efforts to copy the ephemeral messaging app and has finally succeeded in bringing the Snapchat Stories feature to not only Instagram, WhatsApp, and Facebook Messenger, but now directly to the biggest prize of all: Facebook itself. (This feature is only available through Facebook’s mobile app.)

Above: Close-up of the Facebook app with new Snapchat Stories-like feature above the News Feed.

As with Instagram, WhatsApp, and Facebook Messenger, Facebook Stories lets you post photos and videos in a temporary environment. “What we’re trying to do is upgrade the [Facebook] app to be centered around a way people are behaving that involves the camera,” explained product manager Connor Hayes.

Previously available in select countries, Facebook Stories leverages updated camera technology that’s been added into the company’s core app. You can compose a photo or video, apply any of the hundreds of effects, masks, and filters, and share it with your friends through a story, or you can post it directly to your News Feed for others to see. Or, if you’d like, there’s an option to send it directly to a friend like a private message. Either way, the content has a shelf life of 24 hours. 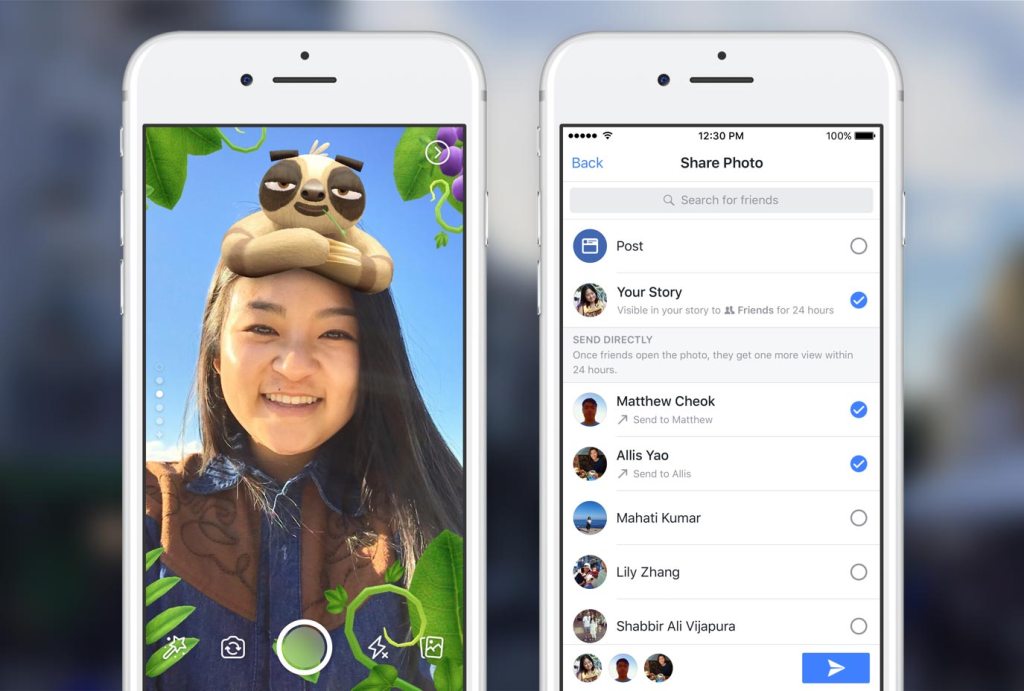 And you don’t need to capture original photos and video to post, as Facebook Stories supports importing previously recorded media from your camera roll. Facebook does allow you to use your phone’s camera to post status updates, but this is not directly tied into the News Feed.

The feature uses augmented reality to let you apply numerous frames, text, doodles, masks, and effects right onto the media. Plus, there’s some facial recognition technology at work to maximize the impact of certain effects, depending on how many people are in the photo or video.

A set of filters, effects, and masks are available worldwide, but Facebook has also created others that are geo-targeted — posts around Carnival will be seen by those in Brazil, but not in Spain, for instance. In fact, there are custom effects for nine specific markets, including the United States, Canada, and the United Kingdom. “The effects are meant to help people create expressions on Facebook,” said Kristen Spilman, the company’s director of art and animation.

Effects include a lazy sloth to highlight how you feel about Mondays, a pizza animation to represent hunger, a filter to celebrate your achievements, and more. There’s even a space cat with laser eyes, and Spilman revealed that soon after the launch of Facebook Stories there will be support for voice transformation, meaning you can have a high-pitch voice, a different accent, and more. And naturally there are graphics to mark occasions such as Pride Week, and even movie premieres.

Like Snap, which has sponsored filters for brand moments around concerts, movies, and events, Facebook has teamed up with movie studios to promote upcoming films, such as Alien: Covenant, Despicable Me 3, Guardians of the Galaxy Vol. 2, Power Rangers, Smurfs: The Lost Village, and Wonder Woman. Outside artists have also been enlisted for their creative chops, with Facebook bringing onboard Hattie Stewart and Douglas Coupland to produce creative effects based on their work. 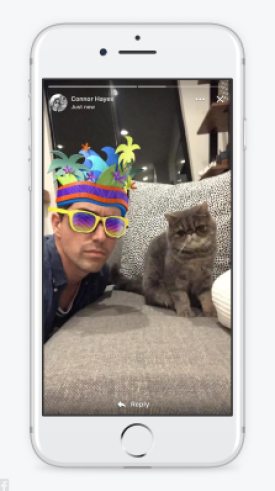 It appears that Facebook has expended considerable resources on its effects, as they seem to be of a higher quality than you’d get within Instagram, WhatsApp, or Messenger. What’s more, the company is also adding Prisma-like filters to the mix, similar to the ones that it made available for live videos. Facebook shared that it is utilizing some technology from its MSQRD acquisition in the masks and effects within stories.

“The goal is to create bodies of work that enhance people’s thoughts and ideas,” Spilman said, describing her team’s strategy behind the design of Facebook Stories. She went on to highlight three guiding principles in the endeavor: Enabling individuality to “shine through” with effects secondary to the storytelling; making it relevant to everyday life, where the story enhances, amplifies, or inspires; and having it be cutting edge, leveraging art and technology together to produce high-quality effects. 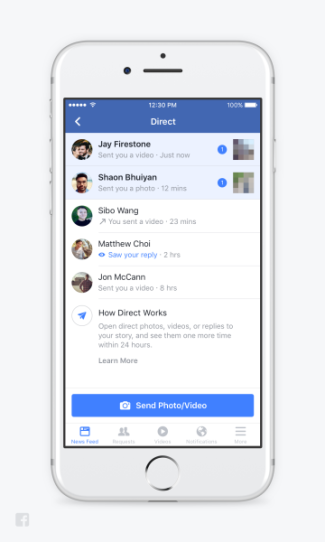 As with other implementations of Snapchat Stories, you’ll be able to see who has viewed your story over the course of its existence. Viewing your friends’ stories will be done automatically, meaning you won’t have to tap on an individual friend to view their day. Friends’ stories are ranked based by how close you are to them. “We want to get your best friend’s content first to you,” Hayes said.

You can comment on a particular story and the conversation will appear in the friend’s Direct feature (the private message feature that’s similar to Instagram’s direct messaging tool). And here’s something interesting: While your photo or video only remains visible for 24 hours, your conversation about it doesn’t necessarily expire in that time frame, as long as the thread remains active.

But while Instagram recently added download support, don’t expect that within Facebook Stories. You can save your work, but it’ll have to be done piecemeal. Content can’t be cross-posted between Facebook properties, either. You also won’t be able to tag friends or apply locations, which is something supported within Instagram Stories.

The social networking company seems to be taking comments about it copying Snapchat in stride, at least publicly. Hayes acknowledged that Snap “really pioneered this format.” But some have wondered whether Facebook’s aggressive push into ephemeral storytelling was a response to the other gaining market share. Hayes dismissed the question, instead suggesting that Facebook Stories is “in response to what people do most often on Facebook: Share photos and videos with friends. We’re giving people the best format to do that on Facebook.”

As with new products and features, Facebook Stories will be available to the general public, but brands and Pages will have to wait a while before they can leverage it. “The plan is to go out and make this a place for friends to get together,” Hayes said. “Maybe we’ll consider [opening it up to brands] down the line.” 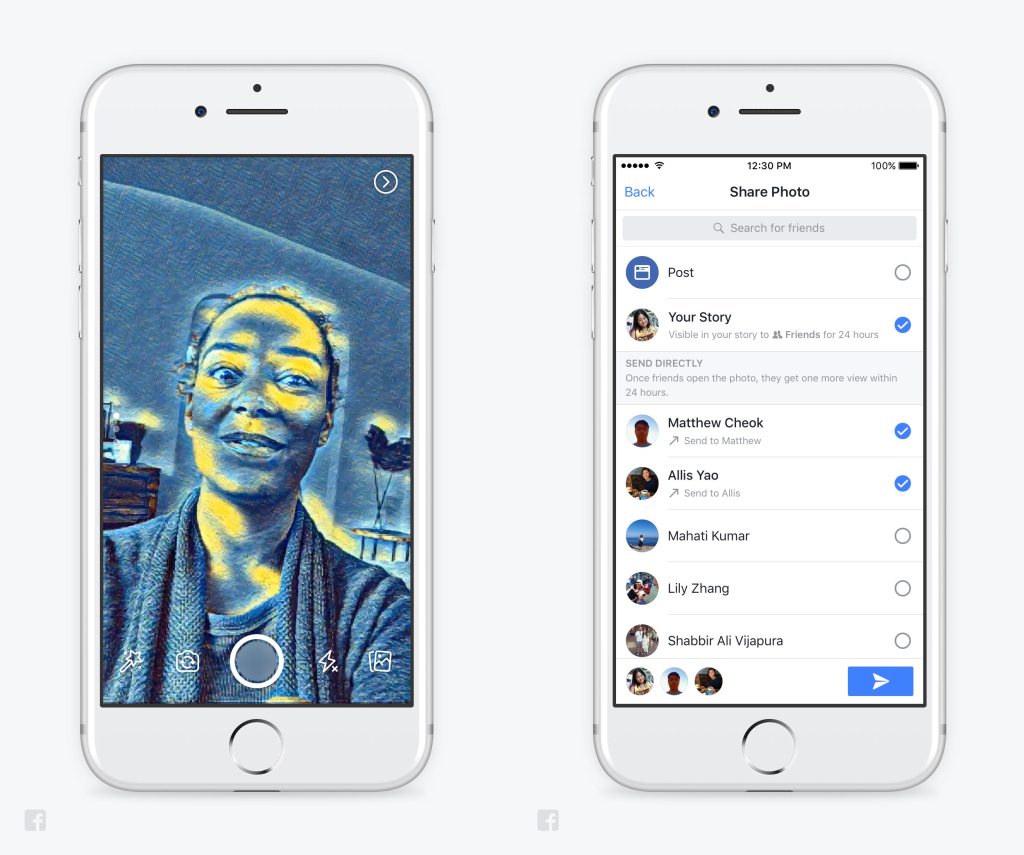 As for talk of Facebook oversaturating Stories by extending the feature to all its properties, the company believes it ultimately comes down to choice, and that each property appeals to a different audience. “The main thing is flexibility…One thing we learned when talking to people, they need more flexibility when sharing on Facebook. Direct will be good for private moments, while stories will be for everything else,” Hayes explained.

In short, Facebook’s message to the world: Let your camera do the talking.