When Facebook acquired virtual reality headset developer Oculus back in 2014, there was no shortage of speculation that the social network’s goal was to generate advertising revenue inside VR headsets. Backed by a survey of 11,300 people across 11 countries, a newly posted Facebook report for marketers suggests how those dollars will be made: by enabling people to preview purchases without visiting physical stores, and facilitating social connections between far-flung friends and family members.

While the study touched on both virtual and augmented reality topics, respondents offered more concrete interest in VR than AR. Across all 11 countries, 65 percent of surveyed users anticipated that VR will become a part of daily life, led by a peak of 87 percent of users in India, compared with 60 percent in the U.S. and a low of 45 percent in France. Similarly, 63 percent of users said they wanted to use VR for pre-purchase product testing, which was apparently the strongest VR use case in the survey.

Previewing travel destinations or hotels was the top use of VR as a pre-purchasing tool, appealing to over 70 percent of all responding users, while watching immersive films and trying on clothes or makeup each averaged just under 60 percent. Surprisingly, using VR for gaming — arguably the top application today — apparently appealed to only 48 percent of all respondents. The numbers were much higher in developing countries than developed ones, reflecting a broader trend for VR as a whole. 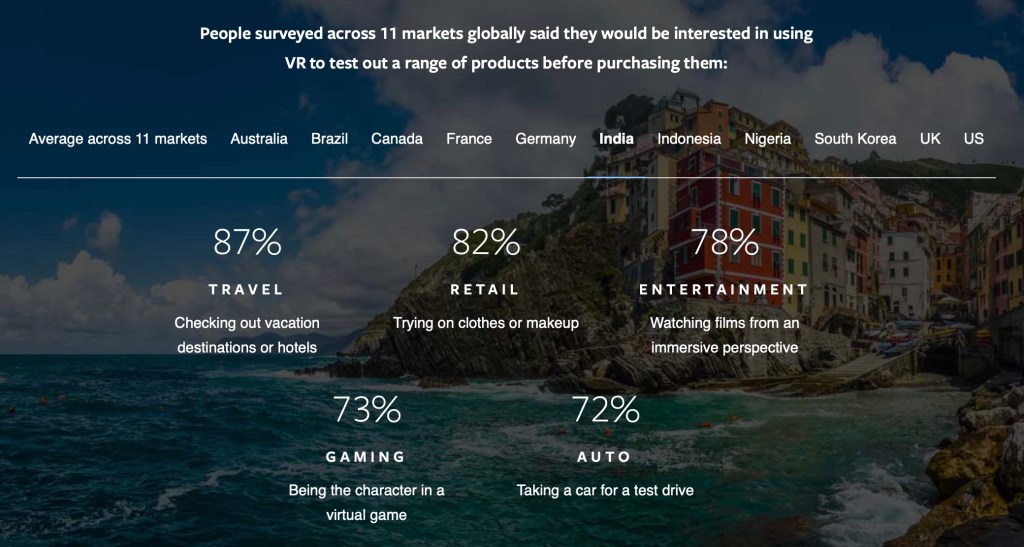 Facebook has repeatedly emphasized its role as a connector of people across spaces, so it’s no surprise that the study found significant interest in related VR applications. According to the survey, 60 percent of people want to use VR to hang out with people who are far away, and 54 percent believe that VR will be used to participate in important events from a distance.

By comparison, AR continues to be in a more nascent state. Facebook notes that users are still becoming acclimated to augmented reality on mobile devices, “even if they don’t think of it as AR.” A few examples include real-time text translators, playing AR games such as Pokémon Go, and adding artificial overlays to Instagram Stories. Facebook says that 63 percent of U.S. internet users have tried an AR experience created by a brand, though it didn’t have many other AR-related statistics to share.

The company framed the survey results as a message to marketers, suggesting that it’s time for retail brands to determine whether using AR or VR will help clinch sales: AR might be best for a beauty product, while VR could work better for a destination, car, or otherwise realistically immersive offering. Current interest levels in both AR and VR “are only set to grow,” Facebook says, spurred by lower-cost all-in-one headsets such as the $200 Oculus Go, which are attracting lots of first-time VR users — as high as 80 percent of the platform’s installed base.