Facebook’s Messenger platform was unveiled in 2015 at the company’s F8 conference with the goal of letting developers “build apps that help people connect.” Last year, it expanded to support chatbots, which could have been a big thing, but ultimately wound up being “overhyped”. This year, however, Facebook is turning its focus more towards discovery, helping the more than 1.2 billion monthly users really understand the potential of its chat app, both in conversing with friends and with businesses.

“We, as Facebook, already have 60 million businesses in the ecosystem, and a large amount of them are on Messenger,” remarked Stan Chudnovsky, Messenger’s head of product. “You can talk to them, but there’s no place to find them. Businesses that are on there wonder how Facebook is improving discovery.”

While much of the past year has been about chatbots, Facebook is releasing and testing new tools to make Messenger more of what the company thinks is “the new social living room for the world.” Starting today, you’ll see new tabs for businesses and bots, games, the introduction of chat extensions, and offline support for parametric QR codes.

Starting today, Facebook Messenger is getting an update that not only introduces dedicated sections to interact with brands and play games, but also adds a new way for third-party apps to be integrated into the experience.

“Our goal at Facebook is not to launch a bunch of bots, but make businesses successful on Messenger and give them the ability to communicate with customers,” Chudnovsky said. “How do you go about it? That’s where bots come in — it’s not the end, but the means to an end. Bots are there to make sure threads between businesses and people are better. We have the ability to give developers capabilities to build a more successful presence on Messenger so everyone enjoys it.” 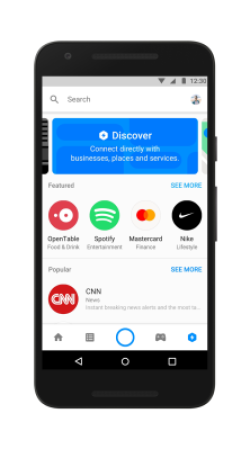 Above: Facebook Messenger discover tab for businesses and bots.

Finding a business and a bot can sometimes require a bit of work within Messenger. Users would have to either be directly linked to the bot from, say, the developer’s Page or locate them through the search bar. Until now, a store or directory didn’t exist.

The home screen on Messenger has become increasingly congested, filled with not only your recent conversations, but unseen messages, favorites, birthday notifications, people who are active now, games, and of course Messenger Day. Facebook has now extracted all businesses and bots to have them reside in a new Discover tab. “This is the place where businesses live,” Chudnovsky explained. “The same place where you can find people, [this is] the same with businesses where you can connect directly with businesses, places, and services.”

He stated that Messenger has always “people direct.” With brands eager to tap into the conversational commerce, it’s one thing to get them on board using the app — it’s another thing to drive customers to use it. If you build it, they’ll come, but only if they can find you.

In this new Discovery tab, businesses of all kinds will be there, be it those with physical locations like Neiman Marcus or well-known brands such as AT&T, Comcast, and CNN, along with other bots. In addition, Chudnovsky shared that nearby businesses would be featured, such as a local barber shop where a prospective customer can talk to the bot, set up an appointment, tap to see when they’re open or closed, get directions — it’s “what everyone wanted,” he said.

Facebook has introduced numerous updates to its Pages feature, giving businesses new ways to connect with customers. And while the company boasted that Pages were mobile-first, the feature was limited in facilitating a dialogue with people; this is the niche that Messenger can fill. The current home feed on the app is too busy, so it’s time to streamline things to prove the benefit of what the platform can do. Perhaps in doing so, Facebook could somehow show brands how to be creative in their usage.

How the businesses and bots will be organized in appearance remains unknown, but it’s feasible to think that Facebook is using a variety of signals, such as previous conversations, who you’ve followed or Pages you’ve liked, and nearby businesses.

Like with Messenger’s Discovery tab, Facebook is also adding a tab dedicated towards gameplay. For more than a year, the company has slowly been introducing games that you can play natively within the chat app. Among the more recent ones is a basketball game played more than 1 billion times that coincided with the NCAA March Madness basketball tournament and a soccer game timed with the 2016 World Cup.

And as businesses have clamored for more discovery features, so too have game developers. Facebook claims that more than 1.5 billion games were played in the past 90 days. To make it easier for users and app makers, there’s one central place to find standard games, as well as turn-by-turn games to make the experience “more social.” Messenger is also getting support for Game bots.

Chudnovsky shared that these games do not have to be played within a message thread and can be done solo as well.

This comes as Facebook is beefing up its game offering. In November, it announced that it’s bringing Instant Games to both its main News Feed and Messenger. Instant Games are HTML5 apps that let you play without having to install something. Instant Games include Pac-Man, Words with Friends, Everwing, Space Invaders, and others.

Another big update that Facebook is launching is a way to better incorporate third-party apps into the messaging experience. Called chat extensions, this feature lets developers bring their app services directly into the conversation — no longer will users have to leave Messenger, which is definitely a good thing for Facebook. It also keeps the discussion going because we all know that interruptions can affect the exchange of ideas, and we forget to say certain things. 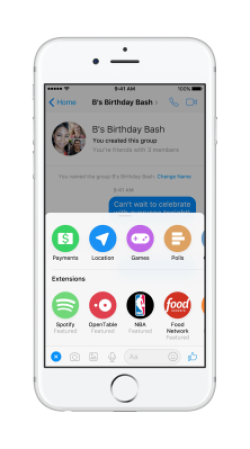 Chat extensions build on top of the updated composer, which some have described as being similar to iMessage. In a blog post, Facebook explained it like this: “We enable multiple people to chat with the same business at the same time. If you are excited to share the newest song you love, you can now add a bot directly in a group thread and share the conversation and experience with your friends.”

Currently only select app partners have been integrated into Messenger, including Kayak, polling bot Swelly, Food Network, OpenTable, Spotify, the NBA, TheScore, and the Wall Street Journal. More will be added in the future, after review by Facebook. These new extensions build on the games, location-based tools, and first-party apps already available within the Messenger composer, according to Chudnovsky.

If you’re having a conversation about an upcoming concert you invited your friend to, they may not be familiar with the artist. Using the Spotify extension within Messenger, you can share a song with your friend; they’ll be able to listen to it within the Messenger app and then browse for other songs. No longer will you have to leave the Facebook app and either Google or find the YouTube link to the artist, paste it into Messenger, and send it to your friend — the process is much more seamless.

Earlier this month, Facebook gave billions of people their first experience of suggested responses, a feature powered by M, its A.I. assistant. This technology will also leverage the new chat extensions. It’s feasible that if you and your friends decide to meet up for dinner after work, Messenger could prompt you with not only a restaurant it thinks your group might like, but also its available reservation times through OpenTable or other similar services.

The more time you spend within Messenger, the more information Facebook is learning about you. Improving its AI service could help it really get to know who you are and what you’re talking about. Perhaps doing so might help with the targeting of ads that could soon be launched on Messenger.

Facebook is also doing more with parametric QR codes, the feature that helps you connect with others by simply scanning the code within Messenger. Businesses, event planners, developers, and users can them in the offline world to connect customers with a chatbot to find out more information. So if you’re at a concert, museum, sporting event, or perhaps sightseeing, you could encounter a parametric QR code. Scan it within Messenger and a related bot will tell you more about where you are.

The use of QR codes is not new in the messaging space. WeChat uses it rather extensively to allow people to pay for purchases or find information. And Snapchat also uses it for connecting users.

All of these features are part of the Messenger platform’s evolution, something that has been going on for more than a year. While many think about bots as the equivalent of Messenger, there’s more to it. Facebook is looking to create an environment where our online lives no longer transact within a browser, but in a messaging app. From communicating with each other to promoting brands, Facebook is launching new features it hopes will allow us to chat with people of interest, in a manner that’s akin to in real life.