Facebook thinks that mobile phones are changing the world, and sees a future where everything starts with our mobile-connected lives. What follows from that, if done right, can be happy users and profitable businesses.

Today, Facebook is sharing its thoughts on the trends in a mobile-first future. In a blog post, Jane Schachtel, the company’s global head of technology and mobile strategy, explained her vision for that future. 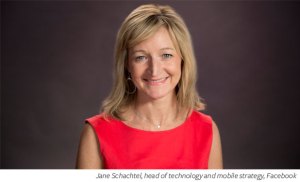 “Mobile phones have existed in one form or another for more than 30 years now, and every day they’re becoming more entwined in people’s lives,” Facebook wrote in its post. “But we are only in the early days of living in a mobile world. Today, a person’s mobile experience depends largely on where they live.”

In the developed world, countless people are using high-end Android phones and iPhones, and connecting via fast mobile networks, while in developing nations, networks are slower, and more people use basic phones. “For many people in these countries mobile phones are also a first point of entry to the Internet.”

With that in mind, here’s Schachtel’s look at the five trends she sees for the future.

In the end, Schachtel concluded, mobile means great opportunities and exciting times for users and businesses. “As more people come online and new technologies become more widely available,” she wrote, “we’ll continue to see more sophisticated solutions for connecting the world. And that’s good for people, and good for businesses.”