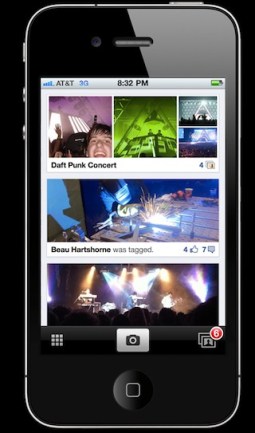 Not that this comes as any surprise, but it appears that Facebook is working on a photo sharing iPhone app of its own, which would help the company tap into the mobile photo craze while adding to the 6 billion photos that already get uploaded to the social network every month.

TechCrunch’s MG Siegler, who received a bundle of leaked photos from the app, describes it as “awesome” and “amazing.” He goes on to say that it’s sort of like “Path meets Instagram meets Color meets (Path’s new side project) With — with a few cool twists.”

All we have to go on right now is the single screenshot Siegler uploaded, but it’s clear from that alone that Facebook was heavily influenced by the competition. The app is apparently being called “Hovertown” or “WithPeople” internally, and it’s still unclear if it’s going to be a standalone app or a new function within Facebook’s iPhone app.

The button on the lower left of the app is exactly the same as the button on the current Facebook app that takes you back to its home screen, so I think it’s more likely that what we’re looking at is a new photo sharing feature within an upgraded Facebook app. At the moment, Facebook has a fairly rudimentary method of uploading new photos via its iPhone app, so this facelift will be a welcome improvement.

Update: TechCrunch released more screenshots of the app this afternoon. Check out a few of them below, which show off social features and multi-picture uploads.