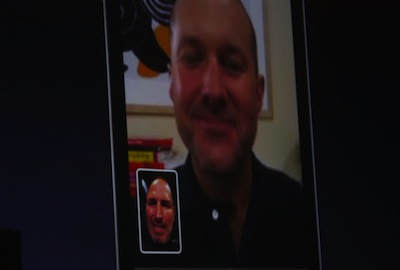 Apple chief executive Steve Jobs already announced a front-facing camera on the new iPhone 4. Now he’s revealed a cool new feature using that camera (and the existing rear camera), the “one more thing” that his presentations are known for — FaceTime, which allows users to make video phone calls.

Jobs made the announcements during his keynote at Apple’s Worldwide Developers Conference today in San Francisco.

Jobs demonstrated FaceTime on-stage, comparing it to the futuristic technology featured in science fiction like The Jetsons. He made a video phone call to Apple designer Jonathan Ive, and it worked with some stalls, supposedly because of all the competing WiFi connections from laptops in the room (a recurring problem at today’s demonstration).

Given the problems that iPhone traffic has already created for AT&T’s cellular network, it’s not a huge surprise that this feature is starting out as WiFi-only. This may have the the added benefit of moving more iPhone calls in general off AT&T and onto WiFi networks.

Update: There’s already a publicly-traded company called FaceTime, but it says it transferred the trademark to Apple. FaceTime says it plans to announce a new name in a few months “to better reflect our capabilities.”