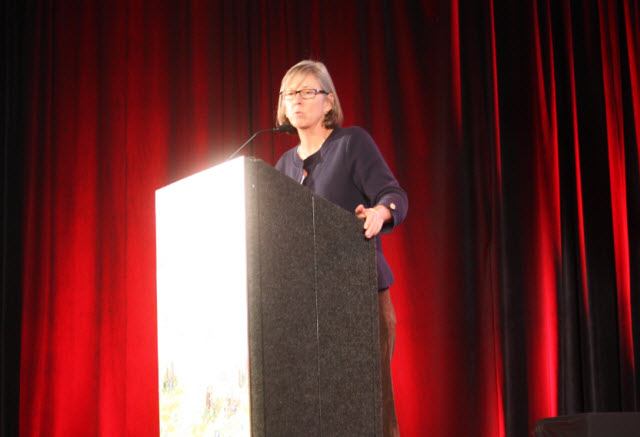 Mary Meeker knows how to pack a lot of facts into a 66-slide PowerPoint deck. Fortunately, the Kleiner Perkins partner is also quite good at decipering what all of those facts mean for our mobile computing future.

At the Web 2.0 Summit in San Francisco on Tuesday, Meeker returned to talk about internet trends at a pace that was faster than I could type. So I recorded her talk on video (see below).

Her first two trend ideas — globality and mobility — were pretty much the same as last year. We’ve got a big global tech business with lots of mobile growth, and Meeker believes the mobile revolution is just in its infancy. These are themes we’re getting used to hearing from pundits of all sorts, so it’s not surprising Meeker is hitting this topic again.

The growth of the internet and mobile computing are two major trends in technology that have happened faster than the adoption of radio and television. While there are 835 million smartphone users now, the potential for growth is huge, since there are 5.6 billion mobile phone users.

Meeker said that iPods, iPads, and iPhones are selling at tremendous rates, but Android phone sales have grown even faster than those for the iPhone. Consequently, mobile search, mobile ads, mobile commerce, mobile apps and mobile usage are all skyrocketing.

Meeker believes that touchscreens have arrived and user interfaces will move to sound (with Apple’s Siri) and motion-sensing as well (with Microsoft’s Kinect). She believes that internet commerce has become so fast, easy, fun and efficient that it will become more important than ever. She notes that digital commerce is only about 8 percent of the commerce market so far.

Just a few years ago, the U.S. looked weak in mobile technology, she said, but now it is the undisputed leader thanks to the rise of Apple and Google and the decline of Nokia. U.S.-made operating systems now command 64 percent of the smartphone market, compaed to 5 percent just five years ago. Facebook, Amazon and eBay are among 14 major companies from the U.S. that are in the ranks of the top 25 “mega-leaders.” It’s worth noting that 81 percent of the users of the top internet properties are outside the U.S.

China is seeing tremendous growth in mobile users, hitting 459 mobile internet users in 2010, compared to 244 million in the U.S. A total of 11 other countries have users who spend more average hours on social networks than users in the U.S.

Meeker believes that events like the Arab Spring signal the empowerment of people via connected mobile devices. The weak economy presents considerable uncertainty. Consumer confidence is weaker than usual, the stock market is more volatile, and gross domestic product forecasts are all being revised downward for 2011 and 2012.

Here are Meeker’s slides and the full presentation and Q&A in three videos.