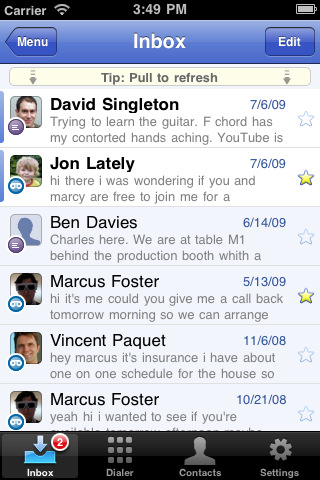 It’s been a long haul for Google, but now iPhone owners can finally download an official Google Voice iPhone app — giving them access to even more Google Voice features than the current web app, although still not as many as Android users enjoy.

We reported in late September that Google was possibly working on the app, spurred on by Apple’s relaxed app development rules announced earlier that month.

Google had submitted a Google Voice app for inclusion in Apple’s App Store last year, but Apple rejected it. Apple later told the FCC that it was studying the app because it was concerned that it was duplicating the iPhone’s voice dialing functions. Google countered by telling the FCC that the app was rejected flat-out. Earlier this year, Google Voice finally found its way to the iPhone in the form of an HTML5 web application.

The HTML5 app was serviceable, but it couldn’t do things like send push notifications, access your iPhone contacts, or take advantage of the multitasking capabilities in the iPhone OS 4 update. The new app offers push notifications for new voicemail or text messages, as well a “direct access numbers” feature that lets users place calls faster than they could with the web app.

Of course, the app also offers standard features like the ability to send calls and text using your Google Voice number, and it lets you listen to voicemail and read voicemail transcription. In my brief testing, I found the app to feel much more polished than the web app. It offers some nice touches as well, like automatically highlighting transcribed voicemail text as it plays the message’s audio.

While it’s a significant upgrade for iPhone owners, the app still lags behind Google Voice’s ability to integrate into the core functionality of Android phones — like hooking directly into the phone’s dialer and native texting app. That will likely never happen on the iPhone, but at least we can be grateful to finally have a full-fledged Google Voice iPhone app.