Mozilla today launched Firefox 47 for Windows, Mac, Linux, and Android. The browser has gained a sidebar for synced tabs from other devices, improvements to YouTube playback and HTML5 support, and is seeing the end of support for Android Gingerbread.

Firefox 47 for the desktop is available for download now on Firefox.com, and all existing users should be able to upgrade to it automatically. As always, the Android version is trickling out slowly on Google Play.

The biggest highlight is a new sidebar for synced tabs. If you’re logged in with your Firefox Account, the sidebar will show all your open tabs from your smartphone and other computers. The sidebar even lets you search for specific tabs. 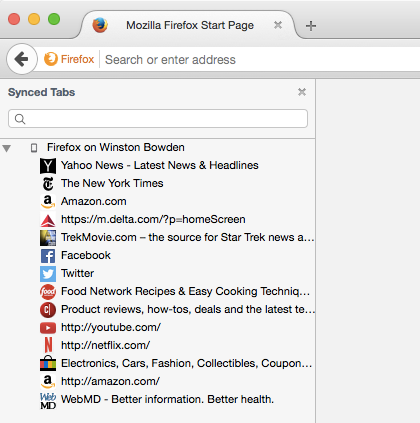 Next, Firefox 47 supports the open source VP9 video codec on machines with powerful multiprocessors. VP9 is the successor to VP8, both of which fall under Google’s WebM project of freeing web codecs from royalty constraints.

If you’re a web developer, more details are available for you here: Firefox 47 for developers.

Firefox for Android has a slew of minor but notable improvements. The biggest is the removal of the icons that show up in the URL bar.

For many this will be a backtracking, but Mozilla insists it’s a necessary security move. It prevents unsecured sites from copying the images of legitimate sites to trick users into thinking the site is safe for sensitive information.

Next up is a feature that lets you show or hide web fonts. The goal is to reduce bandwidth usage for those with data limits.