Firefox has met a notable milestone, as the desktop version of Mozilla’s browser overtook Microsoft’s incarnations globally in terms of usage for the first time, in April.

According to analytics company StatCounter, which tracks browsing data over 15 billion page views per month across three million websites, Firefox narrowly elbowed Internet Explorer and Edge into third place with 15.6 percent desktop browser usage, compared to just 15.5 percent for Microsoft. However, this doesn’t mean that Firefox usage is on the rise — it actually dropped from 16.1 percent in February. What it does indicate is that Microsoft’s browser usage share fell more than Firefox’s. Google’s Chrome browser remains in front with more than 60 percent share. 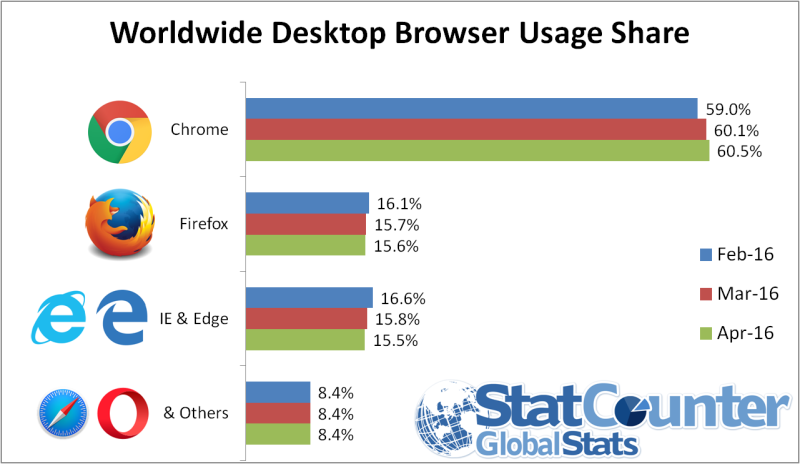 “Microsoft might have expected a boost to its overall browser share as the result of the launch of the Windows 10 with Edge but it hasn’t happened to date,” said Aodhan Cullen, CEO of StatCounter, in a press release. “Chrome has continued to gain share globally.”

Google’s Chrome browser continues to go from strength to strength in terms of user numbers, too. According to Net Applications data, it stole a little more than 10 percent market share in the past 12 months, which roughly correlates with the amount that Microsoft lost. Meanwhile, Firefox’s user market share fell by around one percent.