The fitness tracker market is pretty crowded. But FitBark wants to own the market of fitness trackers for dogs. The company is preparing to ship its FitBark device in March so that you can track your dog’s health with an app. 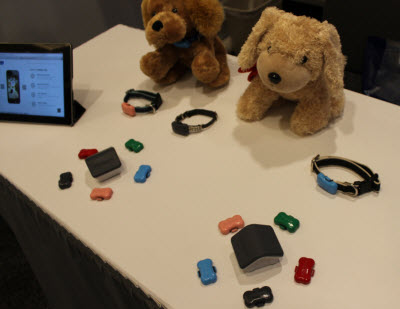 Above: FitBark gadgets fit on your dog’s collar and monitor activity.

“FitBark is a way to be a better dog parent,” said Sara Rossi, co-founder of FitBark, in an interview with VentureBeat.

She was showing the latest version of FitBark off at the Eureka Park section of the 2014 International CES, the big tech trade show in Las Vegas this week.

“It’s a simple family communication network to keep everyone in the loop,” she said. “And it’s like a baby monitor, without the webcam. You can open the app and get real-time status updates on the dog. You can see if it is sleeping, walking, or running.”

It’s not a navigational aid to help find a lost dog. It’s more like monitoring your dog is healthy. It will sell at $99 for the device only and $149 for a portable basestation bundled with the device. That may sound high, but dog owners spend a lot, or about $2,500 a year, according to the American Kennel Club.

The company did a Kickstarter campaign last year that helped it raise seed funding. Scott McGregor, the CEO of chip maker Broadcom, supported the effort and helped publicize the news. I met Davide Rossi at Broadcom’s booth at CES, where the product was on display.

The device is expected to use Broadcom chips, which should help lower the costs. The device is about 20 percent lighter than its initial design last year, and it weighs nine grams. It is also waterproof.

The New York company has seven people working for it. To leverage its community, the company is opening up its applications programming interface (API) to third parties who can develop apps like custom exercise plans or food recommendations.

FitBark is also working with Fujitsu Americas on a prototype to provide shelters with a solution to monitor the health and the behavior of dogs. Fujitsu’s clients include the ASPCA, the largest rescue organization. Advisors include Sharon Feder, chief digital officer at Rachael Ray, Michael Tamaru, former CFO of Jawbone, and Seth Casteel, a pet photographer.

The company is in the process of closing a round of funding.