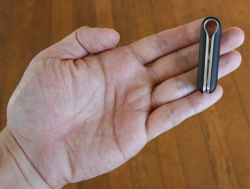 Fitbit, the maker of a small device that tracks how many calories you’ve burned, has raised $2 million in a first round of funding. The San Francisco company was a hit among judges when it launched at the TechCrunch50 conference, and it plans to start selling its devices in early 2009.

There are other portable weight loss devices out there — for example, Weight Watchers offers its own mobile application. What’s exciting about Fitbit, however, is the extent to which the company says it will automate the process. You just clip the device to your clothes, and it tracks things like how many calories you burned through exercise and how well you slept. (Unfortunately, things are a little less automated on the food side; it looks like you’ll need to manually enter the foods you’ve eaten into the Fitbit website.) Then you can view your health reports on the company’s site, and adjust your behavior accordingly.

The Fitbit Tracker will cost $99, and will be available for sale initially on the company’s website, says chief executive James Park. There are plans for a roll-out to retail stores later in the year. If the economic downturn continues, Fitbit may have picked the wrong time to launch a device that some might see as a luxury or a novelty, but Park says the company has kept the Fitbit Tracker relatively affordable.

The round was led by True Ventures, joined by Jeff Clavier’s SoftTech VC and a group of undisclosed angel investors.