Even as Google’s $2.1 billion acquisition hangs over Fitbit, the wearables company today announced three new devices. Fitbit Sense replaces Fitbit Ionic to become the company’s most advanced health smartwatch, with an electrodermal activity (EDA) sensor for managing stress, heart rate tracking, a new ECG app, an on-wrist skin temperature sensor, and Google Assistant. Fitbit also introduced Fitbit Versa 3 with GPS and Google Assistant, plus Fitbit Inspire 2 with battery life of up to 10 days. Fitbit claims the Sense and Versa 3 offer over six days of battery life. You can preorder all three today — Fitbit Sense for $330, Fitbit Versa 3 for $230, and Fitbit Inspire 2 for $100. The smartwatches ship in late September.

Although Google has vowed not to use Fitbit data to target ads, the deal is facing a full EU antitrust probe. Google is one of the four tech giants targeted by increased antitrust investigations — Fitbit is just caught in the middle. However, Fitbit is taking a risk with today’s launch by getting rid of physical buttons on the new devices, something that hasn’t worked well for wearables in the past — small touchscreens suck. Maybe the company is willing to experiment since it doesn’t know what Google will ultimately do with its products. 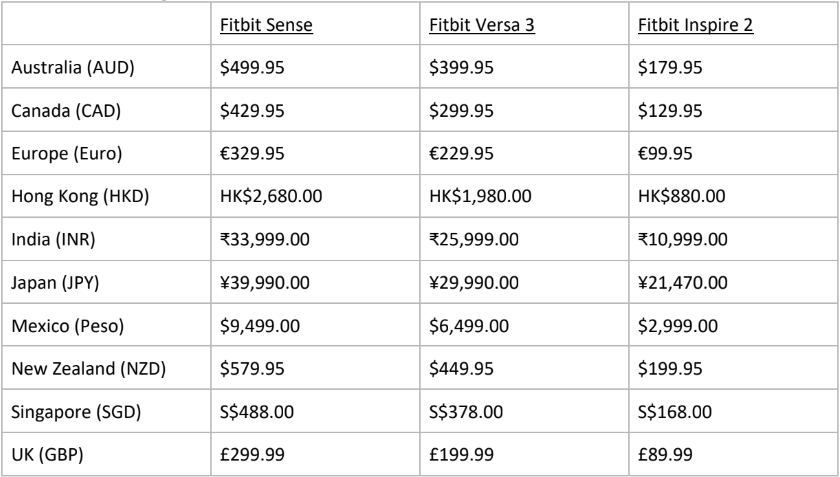 Every story has a coronavirus angle nowadays, and Fitbit argues that wearables may play an important role in the early detection of infectious diseases. The company last week highlighted its COVID-19 study of over 100,000 Fitbit users, which found its algorithm can detect nearly 50% of COVID-19 cases a day before the onset of symptoms with 70% specificity. Changes in some of the metrics in Fitbit Premium (breathing rate, resting heart rate, and heart rate variability) can be detected simultaneously with the onset of COVID-19 symptoms, and sometimes even before. A Fitbit Premium subscription costs $10 per month. Fitbit Sense and Fitbit Versa 3 come with a six-month trial, while Inspire 2 owners get a 12-month trial.

Fitbit first brought Alexa to its devices with the launch of the Fitbit Versa 2 in August 2019. Alexa on Versa 2 lets you start a Fitbit Exercise, find the nearest gym, and ask general questions. Voice commands garner on-screen text responses — press a button, speak into the microphone, and Alexa will silently reply. You can set alarms and timers, check the local weather and news, and even control your smart home devices, right from your wrist.

Both voice assistants will be available on Fitbit Sense and Fitbit Versa 3, but Google Assistant will only be enabled later this year. Fitbit didn’t provide a specific date — the press release merely says “Google Assistant coming winter 2020.” Is that when Fitbit expects Google’s acquisition to close?

“I have confirmation that the merger did not play a role in the addition of the Google Assistant feature,” a Fitbit spokesperson told VentureBeat. “Fitbit added Google Assistant because it was a user-requested feature and many of our users have Google smart home devices, and we wanted to offer a choice between two top voice assistants (Google and Amazon Alexa built-in).”

As you can tell by the price, Fitbit Sense is the company’s new flagship smartwatch. It has all the features of its predecessors, including onboard GPS, 20+ on-device exercise modes, SmartTrack automatic activity tracking, Cardio Fitness Level and Score, and advanced sleep tools. There’s a built-in speaker and microphone to take calls and reply to texts with voice commands, Alexa, Google Assistant, contactless payments, and thousands of apps and clock faces. The watch is water-resistant up to 50 meters, like last year’s Fitbit Versa 2.

Sense’s AMOLED display features an integrated ambient light sensor to automatically dim the screen and an optional always-on display mode. The Sense has no physical buttons, meaning the user interface had to be revamped accordingly. But what really sets the Sense apart is all its sensors — more than any other Fitbit device. 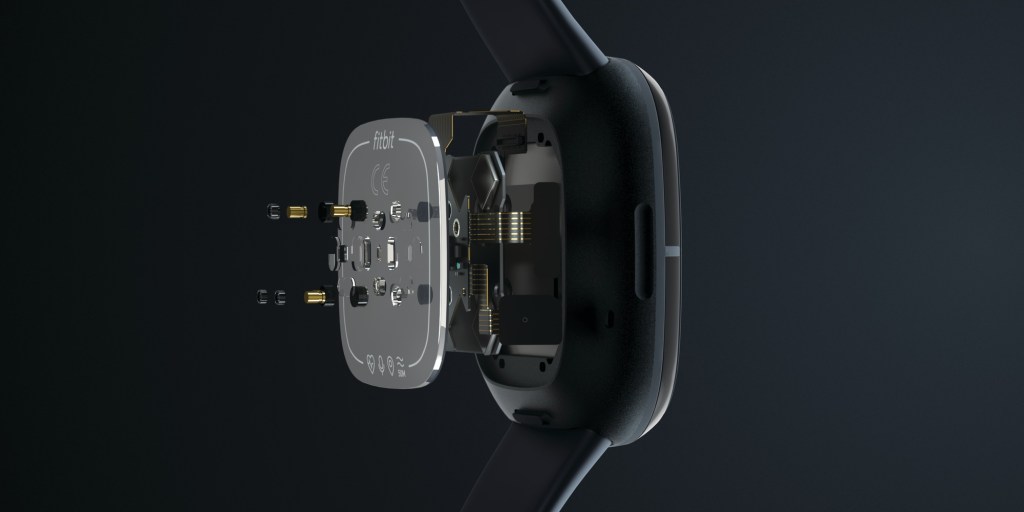 Fitbit Sense can give you insights into your body’s response to stress, which can contribute to a variety of health problems if left unmanaged, like an increased risk of high blood pressure, heart disease, obesity, diabetes, and mental health disorders. The wearable’s EDA sensor measures electrodermal activity responses and the EDA Scan app lets you place your palm over the face of the device to detect small electrical changes in the sweat level of your skin. You can do a quick EDA Scan session to understand your body’s response to stressors or pair it with mindfulness sessions to see how your body responds during meditation or relaxation.

The Fitbit app is also getting a new stress management tile with a Stress Management Score that calculates how your body is responding to stress based on 10 biometric inputs, including exertion balance (impact of activity), responsiveness (heart rate, heart rate variability, and electrodermal activity), and sleep patterns (sleep quality). Ranging from 1-100, a higher score indicates your body is showing fewer physical signs of stress. The app will also make recommendations to help you better manage stress, like breathing exercises and other mindfulness tools. You can set a weekly mindfulness goal, get reminders, reflect on your stress, log your mood after sessions, and meditate. 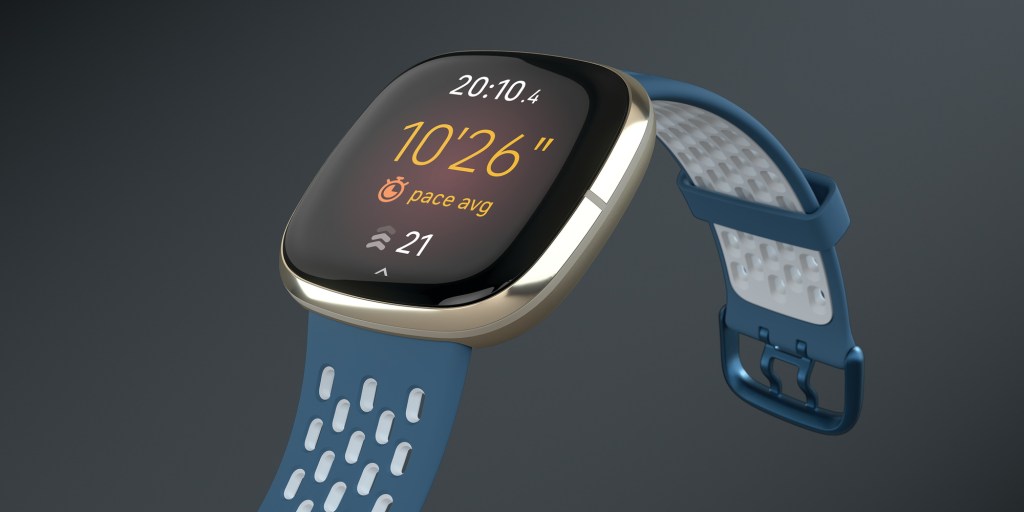 Fitbit Sense is also the company’s first device with an ECG app to assess your heart rhythm for signs of atrial fibrillation (AFib). All it takes is 30 seconds of holding your fingers on the corners of the stainless steel ring around the watch. The resulting reading can be downloaded to share with your doctor.

Additionally, Fitbit updated its heart rate tech with a new multi-path heart rate sensor and algorithm. PurePulse 2.0, as Fitbit calls it, also powers on-device high and low heart rate notifications on Fitbit Sense that can detect if your heart rate is outside your thresholds and send a notification.

Finally, Fitbit Sense includes a new skin temperature sensor to detect changes that may potentially signal a fever, illness, or the start of a new menstrual phase. If you wear it while asleep each night, it will measure your skin temperature variation to spot trends.

The Versa is Fitbit’s most popular smartwatch family, and that’s likely going to continue with the Fitbit Versa 3. The Versa 3 finally adds on-device GPS, which was previously exclusive to the Fitbit Ionic, and an in-app workout intensity map. PurePulse 2.0, Active Zone Minutes, Fitbit Pay, a built-in speaker, and a microphone are all included. As with the Sense, you can take quick phone calls, send calls to voicemail, and adjust call volume — all from your wrist (when paired via Bluetooth with your phone). The Versa 3 is really the Sense minus the aforementioned sensors. 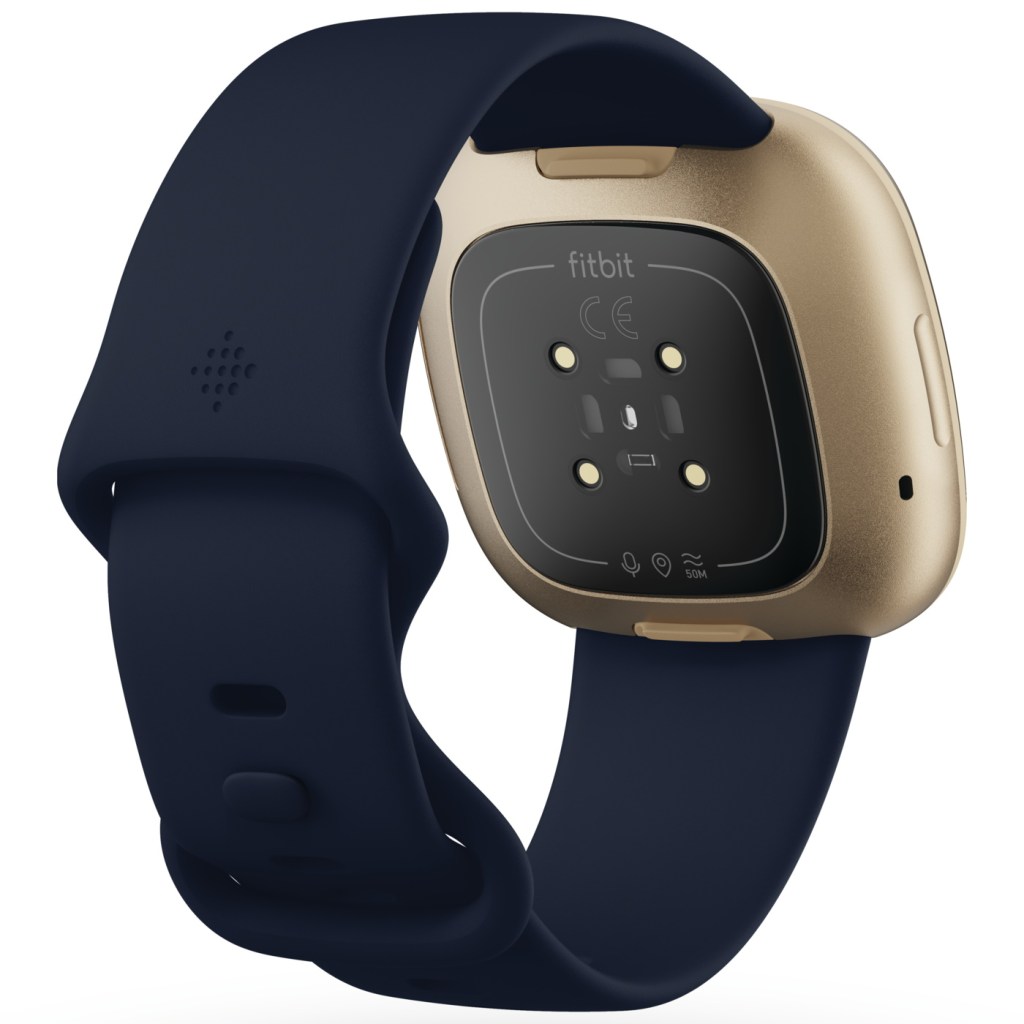 In fact, unlike the Ionic and Versa, the Fitbit Sense and Fitbit Versa 3 use the same magnetic charger. That means if other members of your household use Fitbit devices, you don’t have to worry about dealing with different chargers. (The same charger and design also means accessories are cross-compatible.) Fitbit claims that a 12-minute quick charge provides one full day of use. 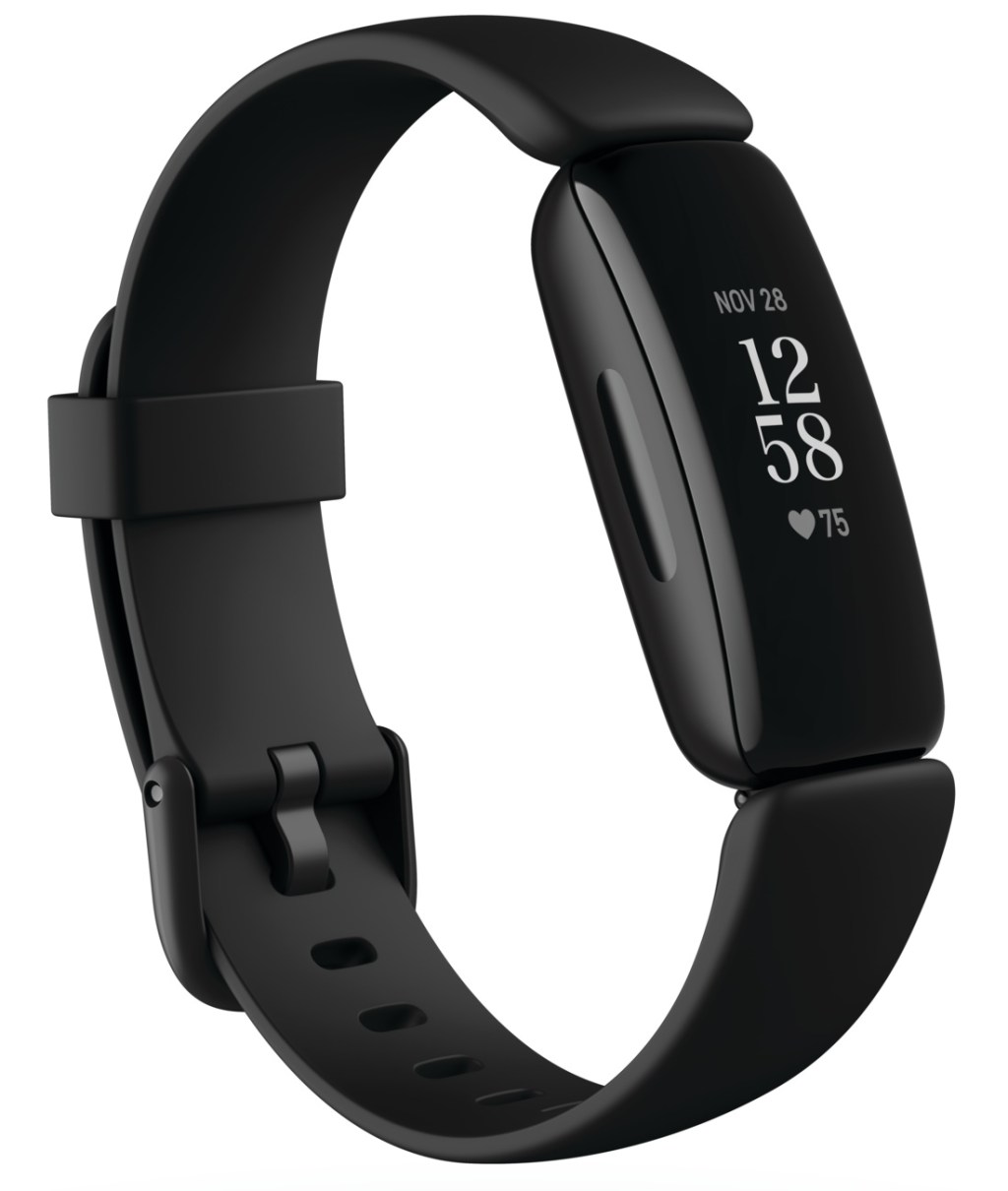 Without smartwatch functionality, the Inspire 2 doubles down on the fitness part of the equation. Features include 20+ goal-based exercise modes, sleep tools, 24/7 heart rate tracking, menstrual health tracking, and logging of food, hydration, and weight.