AT&T is officially launching its 4G LTE network in five cities today, according to the carrier. That means if you’re an AT&T subscriber living in San Antonio, Chicago, Dallas, Houston or Atlanta your mobile Internet access should be faster today. The rest of the country will have to wait jealously until AT&T expands the service to 10 more cities (70 million United States residents total) by the end of the year.

LTE stands for “Long Term Evolution” and it provides a wireless broadband technology that helps mobile devices get faster Internet access. The 4G stands for “fourth generation,” meaning this version of LTE should be faster than the previous editions.

AT&T soft-launched their LTE network about a month ago in a couple cities. The carrier  has been scrambling to catch-up with MetroPCS and Verizon Wireless. Those two carriers have already launched LTE networks in the U.S. Verizon is in the lead with 25 markets covered by its LTE network.

AT&T is also behind the game in regards to LTE-friendly hardware. The carrier doesn’t yet have smartphones that can take advantage of faster LTE network. There are only three AT&T devises that currently work with LTE: the USBConnect Momentum 4G modem, Elevate 4G mobile hotspot and HTC Jetstream Android Honeycomb tablet.

If I had a nickel for every time an AT&T subscriber said they’re switching to Verizon as soon as Apple’s new iPhone 5 comes out I could afford to buy a new iPhone 5. Hopefully this LTE network will help AT&T keep their customers from jumping ship. 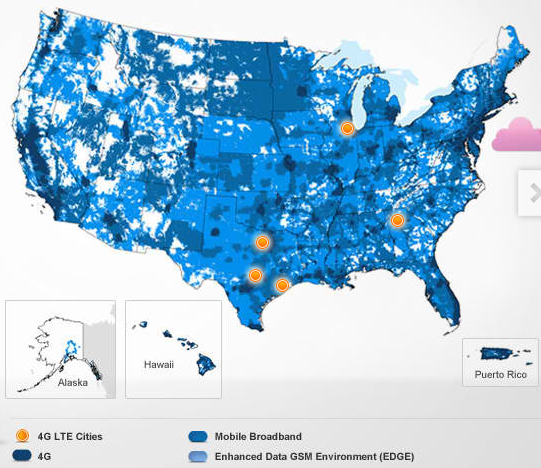