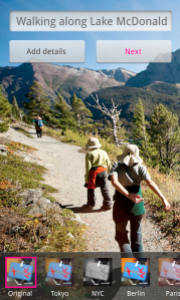 Popular photo-sharing site Flickr is stepping up its mobile efforts with new Android and iOS features.

Photo Session lets you “flip” through a gallery of photos with friends, no matter where they are in the world, using your iPad or iPhone.

“Photo Session is like sitting next to your friend and flipping through photos, but your friend can be anywhere in the world,” Flickr said.

Flickr has had an iPhone app since 2009 but Android users have had to content themselves with unofficial, third-party alternatives until now.

Flickr, which is owned by Yahoo, has 68 million users, 200 million Creative Commons-licensed photos, and the largest pool of geotagged photos of any photo-sharing site, according to Yahoo.

Yahoo is now calling itself “the premier digital media company,” according to Yahoo vice president Steve Douty. Flickr is now the focus of this digital emphasis. Yahoo claims more than 600 million unique visitors a month, and delivers 42,000 customized home pages to site visitors every 5 minutes, he said. Improving the company’s mobile reach is the next step.

“We are committed to being a bigger player than we are today in the mobile space,” Douty said.

The new app is meant to put photography front and center, according to product manager Marcus Spiering.

“We focused around very clean, beautiful design where the photo is in the center of the foreground,” Spiering said at today’s press conference.

Upon entering the app, the “You” screen gives you access to all of your photos, albums and contacts.

Taking a cue from the surging popularity of upstart mobile-phone photography apps like Instagram and Hipstamatic, the new Flickr app includes photo filters as well as sharing tools. There are filters designed to create high-quality photos. Photos go to Flickr automatically but photos can be shared across other social networks including Facebook, Twitter and Tumblr.

You can easily add metadata, and geolocation data is optionally automatically embedded in each photo.

However, said Spiering, privacy options will protect those who don’t want to share their pictures with the whole world.

“We want people to feel very safe, photos are something that are very personal,” said Spiering.