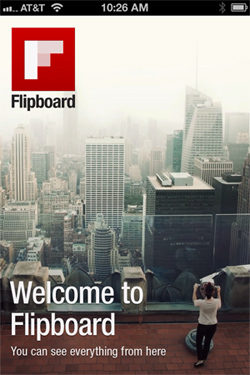 Popular iPad news reading application Flipboard has made the move to the iPhone and while it retains its smart and simple design, it also has added a new Cover Stories section to boot.

Flipboard’s application first gained traction on the iPad because it was a fantastically designed news reader that incorporated social media sites and most importantly, it was free. Over time, it has evolved to include magazine-quality advertising and the ability to include multiple accounts on a single device. But the company has finally decided to evolve further and bring its news-and-photo experience to a second device with the iPhone.

“The iPad is an amazing device that challenged us to rethink how people discover and share social news,” said Mike McCue, CEO of Flipboard, in a statement. “With the iPhone we redesigned Flipboard for a new use case, where people want to find the things they care about even faster and multiple times every day. Flipboard for iPhone puts all the power of Flipboard in your pocket.”

For the iPhone app launch, the Flipboard team has added a new section called Cover Stories. The Flipboard team wants Cover Stories to be first place you open to discover content being shared by your friends on social networks like Twitter and Facebook. The company describes it as a “section that learns from a reader’s interaction with the content, created for when people want to quickly check for interesting news or updates.”

The most recent additions Flipboard added to its application included Tumblr and 500px connections, as well as multiple accounts that would let your family members get in on the Flipboard action. The ability to login from a personal, cloud-based account extends to the iPhone too. The company also launched its app in China just a day ago.

In terms of competition, Flipboard now has to contend with Yahoo’s Livestand app, Zite (which is now owned by CNN) and Editions by AOL. Google is rumored to be launching its own social magazine reader app as well.

Palo Alto, Calif.-based Flipboard has raised $60.5 million to date. Its last funding round was in April for $50 million at a reported $200 million valuation.

The Flipboard app for iPad has been downloaded 4 million times, and the company says its customers make 650 million “flips” (page turns) per month.

Take a look at the gallery below for more screens from Flipboard’s sleek new iPhone app: