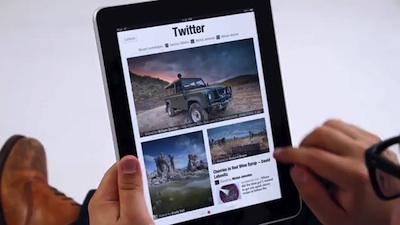 One of the hottest subjects in tech news this morning is the launch of Flipboard, a new startup backed by Kleiner Perkins Caufield & Byers (and others) that makes an app for browsing social networks and other content on the iPad. I just got off the phone with chief executive Mike McCue, who offered more details about his vision for the company and how it plans to make money.

But first, some context about what Flipboard does. Blogger Robert Scoble is raving about Flipboard as the first “killer app” for the iPad. Kleiner partner John Doerr posted on Twitter that it’s “the first and best of a brave new world of social+mobile applications.” Basically, it’s a slick interface for browsing your accounts on Facebook and Twitter, and to browse news content as well. As you might expect given the company’s name, the interface lets you flip through accounts and articles as if you’re turning the pages of a magazine. You can see the app in-action in the video at the end of the post.

Beyond the sexiness of the interface, Flipboard’s other big selling point is the fact that it prioritizes content using social algorithms. Instead of looking at a stream of every post in chronological order, Flipboard users see the content that’s getting the most engagement from their friends and from Flipboard users in general.

McCue, who previously founded TellMe (a Kleiner portfolio company that was acquired by Microsoft for $800 million) said he started thinking about Flipboard as a response to the question, “Why is the Web getting so ugly?” McCue and his cofounder Evan Doll (formerly a senior iPhone engineer at Apple) went through a number of ideas, including an HTML5-format website, before realizing that the iPad was the best device to achieve their goals and that “social curation” was the best approach.

The Flipboard app is free, and the Palo Alto, Calif.-based company is focusing for now on improving the app rather than making money, McCue said. But he was willing to talk broadly about his business plans. The company wants to work with publishers to create Flipboard-optimized versions of their sites, so one possibility is a content subscription model. He argued that people might not be willing to pay for widely distributed, “commoditized” news, but some will pay for in-depth content.

The other possibility is advertising. Like other publishers and advertisers looking at the iPad, McCue said he’s excited about the opportunities to deliver richer, more satisfying ad experiences. If you look at a magazine like Vogue, anecdotal evidence suggests people actually prefer to read the print magazine with ads, since they’re part of the experience. But ads on the Web are so crummy that when someone visits the Vogue website, they want to avoid those ads as much as possible.

“This is a design problem as much as this is a business model issue,” McCue said.

As for other devices, he said Flipboard is definitely considering a move beyond the iPad, but that it wants to focus on Apple’s device initially.

“We’re making a big bet on the iPad, rightly or wrongly,” McCue said. “We actually think the iPad is underhyped.”

We previously broke the news that Flipboard was raising funding from Kleiner and Index Ventures, but the company officially announced the round today. It has raised $10.5 million from Kleiner, Index, and a number of high-profile individual investors, including Twitter cofounder Jack Dorsey, Facebook cofounder Dustin Moskovitz, The Chernin Group founded by Peter Chernin, Ron Conway, Alfred Lin, Peter Currie, Quincy Smith, and Ashton Kutcher. (Amusingly, the actor in the demo video below is the same guy in the launch video for Dorsey’s startup, Square.)

Flipboard also announced that it has acquired Ellerdale, a semantic analysis startup, which should help it deliver improved content recommendations.

Is Flipboard worth the hype? I’ve downloaded the app and played with it a bit. It’s definitely one of the best reading experiences I’ve had on the iPad. Unfortunately, the startup is a bit overloaded with users right now. Anyone can download Flipboard and read the general content, but the company is only gradually giving out invites to connect the app to your social network profile. So I haven’t seen the social component in action.