Flipboard has added another big-name publisher to its magazine platform. Fans of The New Yorker will now be able to access the magazine’s stories from its app, according to the company. This will be the first time that Flipboard has made a magazine available through a metered system.

Today’s announcement comes as Flipboard marks its five-year anniversary and gives readers another source of content, adding to a roster that includes Reuters, TIME, CBS Sports, People magazine, and others.

Oh, and one other thing, the company has released some new user metrics, sharing that it now has 72 million monthly active users (MAUs), of which 36 million alone used Flipboard within the last week. At least 8.2 billion stories per month are flipped on the platform with users following on average 32 topics. Users are certainly active and growing, especially considering that just over two weeks ago, Flipboard CEO Mike McCue said at VentureBeat’s MobileBeat conference that his company counted 70 million MAUs. 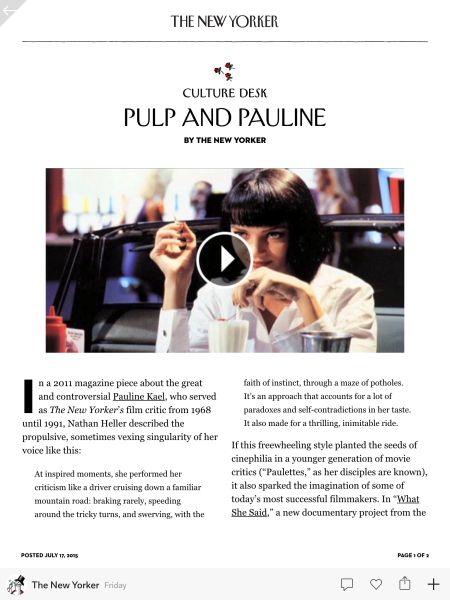 “Partnering with publishers is core to our vision and the fact that Flipboard now contributes to The New Yorker’s strategy to reach its audience and monetize its content is an acknowledgement of the model we’ve been building over the last five years,”said McCue in the company’s press release.

If you’d like to read The New Yorker on Flipboard, you’ll be able to access six stories a month before being blocked by the paywall. The magazine will then display a screen prompting you to sign up and become a subscriber. If you’re a current magazine subscriber, you can authenticate within the Flipboard app for access to not only the weekly magazine, but also the daily stream of web stories, blog posts, and multimedia content.

It’s important to note that this is the first time that Flipboard has made such an arrangement, but if this gains traction, the company could perhaps use it as leverage to entice other publications with paywalls to follow suit. This would be good news for users as it would give them greater access to content without their having to leave the app. In all likelihood, users would be motivated to flip more, leading to greater exposure to advertisements and helping Flipboard generate revenue.

Although it’s not as if Flipboard is exactly hurting for cash. The company recently raised $50 million in new funding, which will most likely help it stave off attacks from competitors such as Yahoo’s News Digest and Apple’s news-reading app.