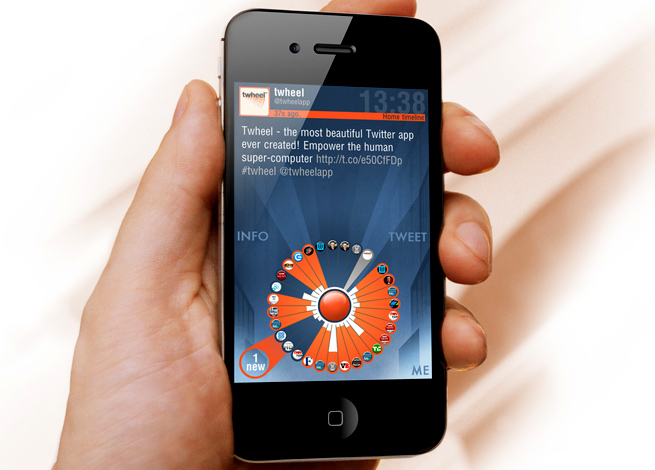 If you’ve ever wanted to speed through your tweets faster, Fluid Interaction‘s just-launched Twheel app may be exactly what you’re looking for. The company’s app turns your Twitter feed into a rotating wheel and claims to increase your “tweet consumption speed by 25 percent.”

Ideally, Twheel will reduce redundant tweets and create a more dynamic way to consume information from Twitter. The sharply designed Twheel app “pulls signals out of noise based on topics, sources, and popularity,” creating a more readable river of tweets.

“We based the look and feel of Twheel on our understanding of human cognition,” Fluid Interaction CEO Kalle Määttä told VentureBeat via e-mail. “Twheel gives me the big picture of what’s happening on my Twitter.”

Määttä believes Twheel will stand out among the third-party clients people use to access Twitter, including Hootsuite and Tweetbot.

“Twheel is unlike any other Twitter client,” Määttä said. “The plethora of Twitter apps out there rely on the same list-based UI model as Twitter’s own solutions with minor tweaks in usability. Instead, we have redesigned the whole user experience, optimizing for efficient, playful, and fun consumption of content.”

To generate revenue, Fluid Interaction intends to offer a freemium-style app for users and then offer user behavior data to advertisers and publishers.

“Our first goal is to attract 10 percent of mobile Twitter users and generate a high ARPU,” Määttä said. “Achieving a solid Twitter user-base, we will provide our solution over other social media networks.”

Helsinki, Finland-based Fluid Interaction was founded in 2010 and has received undisclosed investments from Tekes, the Finnish Funding Agency for Technology and Innovation, and a private angel investor. The company has six employees.