Apple had a very good 2017 holiday season, once again holding the top place in smartphone and tablet activations, though it remained at 44 percent of total activations in both 2016 and 2017, according to Flurry Analytics. By comparison, rival Samsung gained 5 percentage points over the same time period, jumping from 21 percent to 26 percent, which Flurry attributes primarily to weakness in Samsung’s 2016 sales attributable to the Galaxy Note 7 recall.

Having once been name-dropped by Apple’s late CEO Steve Jobs after accurately finding evidence of unannounced Apple phones and tablets in its logs, Flurry has a positive track record of measuring new smartphone and tablet usage. The Oath- and Yahoo-owned mobile analytics and advertising firm’s data is global, although it is naturally skewed towards the 250,000 developers that use its platform, which reaches more than 940,000 apps and sees 10 billion daily sessions. Flurry taps its data for these sessions to determine which devices were purchased and which apps were the first to be downloaded and installed.

Surprisingly, the highest percentages of Apple activations came from the iPhone 7 and iPhone 6 — the latter re-introduced as a budget model in certain markets — with the iPhone X close behind. The new iPhone 8 and 8 Plus similarly came in distant 6th and 7th places to older models. Flurry suggests that the sales of older iPhones demonstrate that “consumer concern for cost is still significant,” despite heavier marketing of flagship phones.

On the Android side, it’s noteworthy that Google failed to appear on the chart at all, “despite the fanfare around the launch of the Pixel 2.” Flurry suggests that too few models and lack of consumer mindshare show that the Pixel lineup “is failing to pique users’ interest.” However, five Android phone vendors each saw modest upticks: Huawei jumped 2 percentage points to hit 5 percent in 2017, while Xiaomi, Motorola, LG, and Oppo each gained a single percentage point to tie at 3 percent. Despite strong sales of Echo smart speakers, Amazon notably disappeared entirely from the smartphone and tablet list, while Vivo took its place as a 2 percent player thanks to growth in China and India. 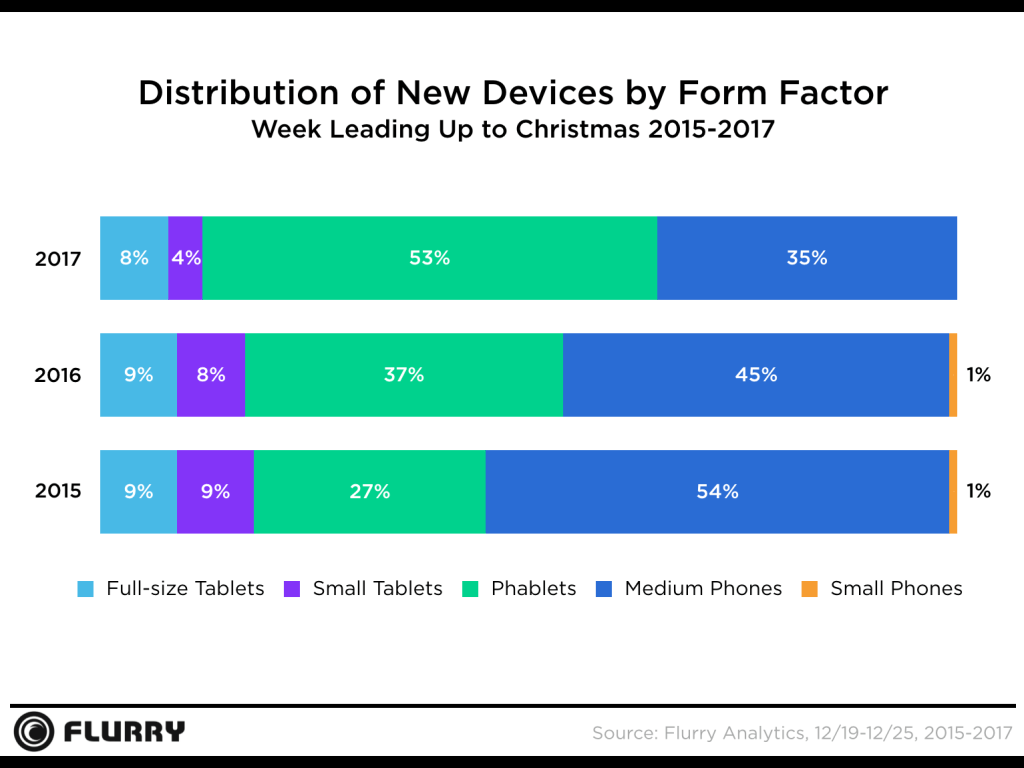 Flurry notes that phablets — phones with 5-inch to 6.9-inch screens — have become the “dominant global device,” overtaking 3.5-inch- to 4.9-inch-screened phones with 53 percent of all holiday activations. As larger phones are now “often eliminating the need for both a tablet and medium or small phone,” the total share held by traditional tablets shrunk to 12 percent from 2016’s 17 percent and 2015’s 18 percent. No iPad model made Flurry’s top ten list of Apple devices by activation, suggesting that even the worst-selling iPhone outperformed the best-selling iPad for the holidays.