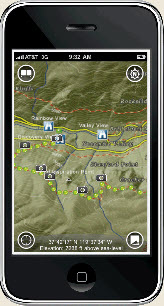 App developers have to be on their toes as they adapt to the arrival of iPhone 3.0 software as well as the newest model, the iPhone 3G S. Mapping applications are a case in point. One of the apps for existing iPhones, Compass, has now been rendered obsolete by the iPhone 3G S, which has a built-in component called a magnetometer that gives the phone its own built-in compass.

On the other hand, one of the major beneficiaries of iPhone 3.0 software, which will be available for download into existing iPhones started June 17, is AccuTerra from Intermap Technologies of Englewood, Colo. AccuTerra provides geologically accurate maps with relief data and other details that Google Maps (built into the iPhone) doesn’t provide. It’s precise enough for hikers to use. Last night, AccuTerra won the iPhone 3.0 design award at the Worldwide Developer Conference.

The iPhone 3.0 software gives users the ability to purchase and download an app on the spot from the iPhone itself, rather than going through iTunes. You can also easily extend an app by getting new material for it, such as downloading a new piece of a map. That’s important because the maps contain a lot of data, sometimes 10 megabytes worth for just 50 square miles of territory.

In the past, the map makers would have had to create a separate app for every piece of a region that had to be downloaded. It would have been ridiculous of Intermap to create a new iPhone app for each piece of territory. But now with the iPhone 3.0 software, AccuTerra has just one app that users download. Then they can purchase additional pieces of territory which are downloaded as extensions to the app they already have.

Another new feature of iPhone 3.0 is the ability to search through content on the phone. You can search for a map location and the app will pull it up for you. You can also use the new “push notification” to send a friend a history of your hike once you’ve finished it.

AccuTerra competes with Google Earth, which streams new data into the phone as you move about. But the problem with that is that many hikers move out of cell phone range. Once they do that, they can no longer download new map data. By contrast, Accuterra downloads an entire region to the phone — a task a hiker can do before going on a trip. The hiker can then access the map even without a cell signal.

One of the cool things about AccuTerra is that you can take pictures with an iPhone, and it tags them with the GPS coordinates where the picture was taken. When you get home, you can show friends the exact trail you walked and then pull up the pictures you took along the way. AccuTerra costs $9.99, and each additional map extension costs 99 cents.

Are you an entrepreneur or executive active in mobile? Join us at MobileBeat 2009, our mobile conference for industry leaders. Register for the conference here.