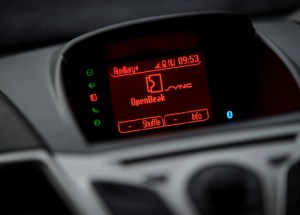 Ford is betting big on the smartphone. The U.S. automaker has announced that its upgrading some of its 2012 fleet to play nice with apps.

“Mobile app growth is literally skyrocketing,” Ford’s president of operations, Mark Fields told Reuters.  “This is a trend that we cannot ignore, especially as a Nationwide Insurance study shows that one in four Americans who download apps admits to using them while driving.”

The new addition for the 2012 line (dubbed Sync Applink) is an extension of the SYNC platform, which is designed to smoothly integrate the navigation/audio/entertainment systems in Ford’s cars. Sync Applink actually made its debut in the tiny Ford Fiesta. The app-friendly feature is poised to add Pandora streaming, voice search, and app status messages to a larger chunk of Ford’s cars, and it comes after a couple of fumbles with Ford’s own dashboard OS (MyFord Touch).

Naturally, Ford has a long way to go before it reaches the app-fueled automotive utopia it’s gunning for. As of the announcement, only the 2012 Fusion sedan, F-150 truck, Expedition SUV, and Ford Mustang are slated to get the upgrade–and that’s on top of the roughly $400 cost for customers to have baseline SYNC installed. Furthermore, the slate of compelling compatible apps is relatively small, with currently only Android OS and BlackBerry supported.

Lack of support aside, after Consumer Report’s refusal to endorse Sync Applink’s distracting predecessor, it might be a sound business decision based off safety alone.