You might recall that Ford acquired electric scooter company Spin for a reported $100 million last November. A swift ramp-up just months afterward brought the Detroit-based automaker’s ambitions into focus. Now, with the stated goal of launching in 100 cities by 2020 and well beyond in the years to come, Spin is beginning to lay the foundation for a network that competes with incumbents like Bird and Lime.

Spin today refreshed its website, app, and logo and unveiled its third-generation scooter, 15,000 units of which will hit the streets of Portland, Los Angeles, Berkeley, Denver, Washington D.C., Kansas City, Memphis, and Minneapolis, starting in August 2019 (with more cities to follow). The company says the new electric scooter — which will be manufactured by Segway-Ninebot, a Chinese-American company backed by Xiaomi — was designed with “custom” components and security features and successfully completed a Baltimore-based pilot program in June.

“We will continue to support the creation of more durable and robust scooters in order to meet the market demand and provide our riders with a safe, smooth, affordable, and reliable ride,” said Spin cofounder and chief operating officer Zaizhuang Cheng in a statement.

Spin’s new e-scooter features a larger, stronger frame and a wider and longer riding platform than its predecessor, along with a bike-handle braking system that’s both more intuitive and responsive. The 10-inch tubeless tires — which are substantially larger than those on Spin’s second-generation e-scooters — ostensibly provide better shock absorption over rough terrain and conditions, while the rear-drive mechanism delivers improved acceleration and uphill performance.

Spin says its forthcoming e-scooter also sports exclusive antitheft features developed to deter tampering and vandalism and that the enhanced backend authentication system can uniquely associate modules with each e-scooter. With respect to range, the Ford subsidiary claims the e-scooters’ upgraded batteries can last up to 37.5 miles on a charge, or 7.5 miles further than Bird’s Bird One and Lime’s Lime-S Generation 3.

Cheng expects that — thanks to their extended range — the third-generation e-scooters will increase gross profit margin once they deploy widely throughout the network. “In our pilot, we have seen significant increases in the number of rides, distance traveled, and revenue, as well as 100% utilization,” he said. 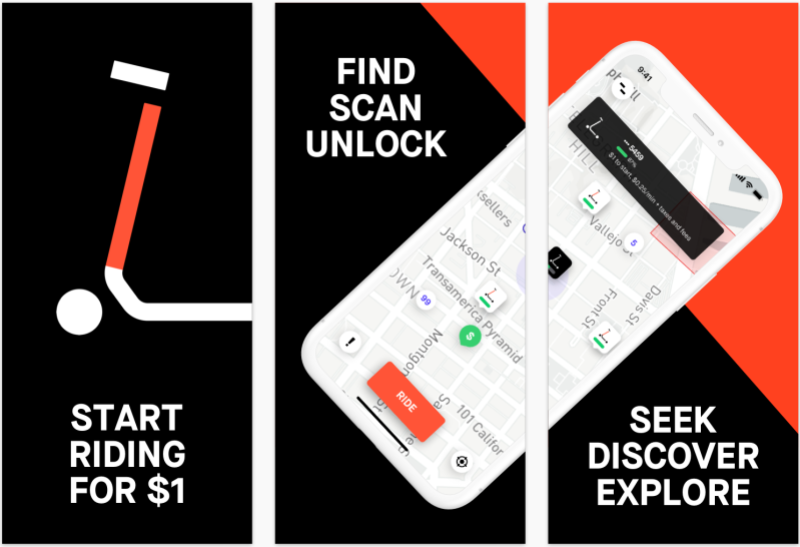 Above: The redesigned Spin app.

Spin also announced today that it has more than quadrupled the number of dockless scooter markets it operates in to 47 cities and college campuses stateside, 11 of which have no competitors. Moreover, it revealed that it has increased its fleet size by 1,900% and the number of rides that fleet is regularly providing by 1,100%. (By comparison, Bird and Lime each operate in more than 100 cities domestically and dozens of cities internationally.)

San Francisco isn’t one of those markets, and likely won’t be for some time. Last March, Spin — along with Bird and Lime — was forced to remove its fleet of e-scooters from public streets until the city worked out a permitting process. Spin was denied an appeal late last year, but the neutral hearing officer in the appeals process recommended that the San Francisco Municipal Transportation Agency consider including Spin in its pilot program.

Of course, it remains to be seen what sort of resources Ford puts behind Spin in the months ahead. Reuters reported that the carmaker had committed to a $200 million investment, but its mobility experiments extend far and wide to companies like San Francisco-based shuttle van service Chariot, which Ford bought for $65 million three years ago in an all-cash deal, and programs like the docked bicycle-sharing service in the Bay Area — Ford GoBikes — Ford operates in partnership with Lyft-owned Motivate.

Spin has myriad competitors, but its chief rivals are undoubtedly Bird and Lime, which have raised $273 million and $765 million to date, respectively. Jump Bikes raked in $10 million last January before it was acquired by Uber in April and expanded into electric scooters, and Lyft announced in September that Denver would be the first U.S. market for its dockless e-scooters. Overseas, Dutch startup Dott secured $23 million for its fleet of electric scooters and bikes after Sweden’s Voi raised $50 million to expand its electric scooters to more cities across Europe.

But Spin president Euwyn Poon believes the company he helped cofound has a fighting chance, an optimism he says is reflected in Spin’s new brand identity. “[The redesign] draws inspiration from the excitement and joy of riding Spin scooters and takes a bold yet playful approach to design,” he said. “Just as riders are able to adapt, react, and make plans at the spur of the moment, the logomark embodies a feeling of spontaneity and motion.”

With any luck, “spontaneity” and “motion” will translate to profits for a parent company whose ventures are increasingly multimodel.