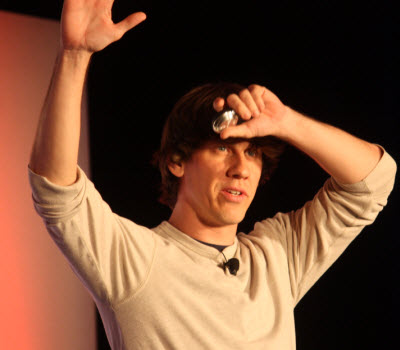 As Foursquare approaches a million users a year after launching its location-based game, the company is making formal alliances with brands and stores that want to exploit its popularity. And that is turning into real money for an app that many people believed was pointless when it started. 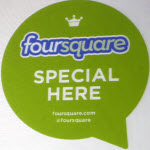 Dennis Crowley, chief executive of Foursquare (right), said at the Where 2.0 conference today that more stores, restaurants and brands are joining the company’s new digital coupon program by putting stickers in their windows that offer coupons to Foursquare users who visit them.

With Foursquare, you check in at a given location using your mobile phone. The location information is uploaded to the service, and you can earn the title of “mayor” of a place if you have spent more time there than any other Foursquare user. The achievement is then automatically posted on Twitter. It sounds silly and simple, but Crowley said the app will hit a million users in a few weeks. Those members have “checked in” to locations more than 22 million times. The mission, Crowley said, is to “turn the whole world into a video game.” 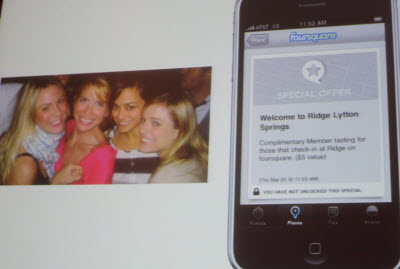 “We want to know if you can get the same feeling from Foursquare as when you play Zelda [a video game series] for six hours,” Crowley said.

Foursquare got a ton of users because it made the app game-like, with lots of rewards. People can get badges for being a karaoke expert if they visit a karaoke bar three times in a month. Those badges are so popular that Foursquare users are changing their regular behavior to win badges, Crowley said. Parents use Foursquare at playgrounds to organize play dates. Badges have multiplied like crazy. 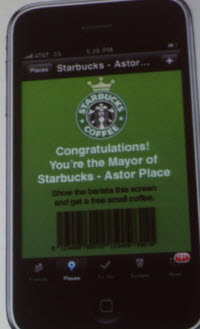 And the app is now so popular it is starting to generate commercial results, as you can see from the above picture of a digital coupon offered via the Ridge Lytton Springs winery in Napa Valley, Calif. AJ Bombers, a burger joint in Milwaukee, said its sales went up 30 percent after it posted Foursquare stickers in its windows and gave out coupons to Foursquare users who visited it. Foursquare has created partnerships with MTV and Starbucks (pictured left). 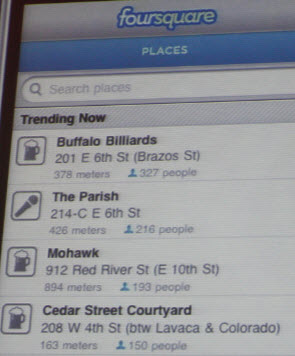 At the recent South by Southwest conference in Austin, Foursquare showed the biggest parties in real time so members could go to parties where the most people were. See the picture at right for a real example of that in action.

It remains to be seen if Foursquare can make a lot of money out of this or if the service will be somehow crushed by Twitter, which is launching its own location services. And it’s worth noting that location-based rivals such as Booyah’s MyTown, which has 1.5 million users, are also planning on cashing in on Foursquare’s popularity.