Foursquare has updated its Swarm app with features that increase engagement and move beyond the check-in. Users will find that the app now lets you use coins to pay for perks while also extending its popular stickers to iOS 10’s iMessage app.

Launched in 2014 as part of the company’s unbundling effort, Swarm is an application that brings mayorships, check-ins, and fun back into the location-based service. Recently, it received an overhaul with a focus on lifelogging and other efforts to help make sense of where you’ve been. Tuesday’s release now lets users take advantage of perks they’ve earned through all their check-ins. “These are ways to save money at your favorite places,” remarked Jonathan “J” Crowley, Foursquare’s vice president of product. 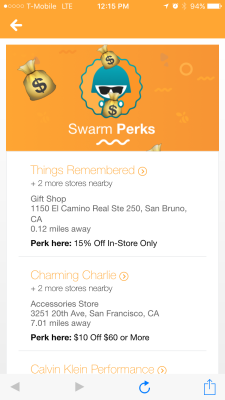 The company is leveraging Perks, which were introduced in June to incentivize people to check in to places. At the time, Crowley told VentureBeat that the focus was on giving something back to users, but another view was that the more check-ins made, the more powerful Foursquare’s database is. The company now counts more than 10 billion check-ins since launching nearly 8 years ago.

Foursquare is working with a few companies initially, but will have tens of thousands over the next couple of weeks across the U.S. When you use Swarm, you’ll be asked whether you want to enroll in a specific perk. But unlike previously, where perks might have depended on the number of times you’ve checked in, the only way you can take advantage of a perk now is by spending earned coins.

To encourage perk usage, Swarm also uses your location to display nearby perks, including those coming from large chains or small and medium-sized businesses such as coffee shops. If you see a perk you like, check in and you’ll see a digital “lottery ticket” you scratch to reveal how many coins are needed to redeem. Show the merchant the discount and that’s it.

Coins can be accrued by checking in, using enhanced stickers, or even responding to trivia questions that Foursquare has added to the Swarm app. The company knows that users love to check in and keep track of the places they’ve been, so it’s now testing to see how well you know your history. When you visit a place, Swarm will prompt you to respond to questions such as when’s the last time you checked in with a particular friend, the most times you’ve been in a coffee shop, and more. If you guess the right answer, you’ll earn coins. 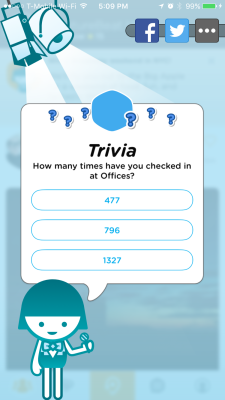 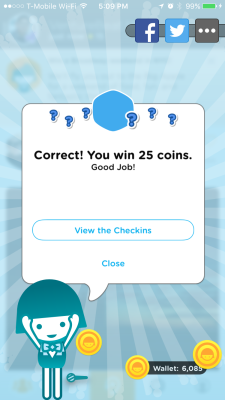 Now that you need the coins for perks, Crowley believes people will “want to play the game faster and harder to earn more coins.” Although the redeemable value varies based on the size and type of the deal, we’re told that on average it might be 100 coins to unlock lower-end perks or a couple hundred more to secure sweeter perks.

But that’s not all that’s been added to Swarm, as Foursquare is taking advantage of an interesting feature that’s a part of Apple’s iOS app. The company has introduced a sticker pack that lets you use the colorful designs in Swarm outside of the app for the first time. Now you can incorporate more than 20 stickers within a conversation in iMessage. As you unlock certain new stickers, they’ll also be added to sticker packs to be used later. 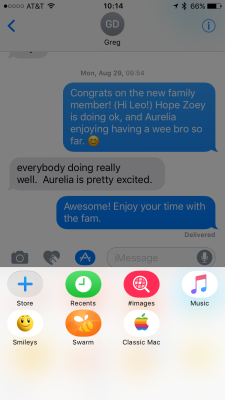 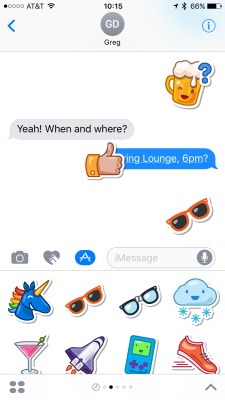 Foursquare’s namesake app is also getting a bit of a redesign in a move the company says makes it “fresher, cleaner, and faster,” with a focus on surfacing recommendations based on where you are or events that are happening. With Foursquare version 10.0, the home screen has been simplified with search placed front and center. It now includes six buttons featuring the 6 most popular searches: breakfast, lunch, dinner, coffee/tea, nightlife, and things to do.

The app leverages social signals and past history in order to highlight things that you know you want, such as recognizing that tonight you might want a drink or today a burger for lunch. “The new home screen is taking a lot of the lean back experience, the pecking, hunting, thinking, and removing it,” Crowley explained. He further shared that it’s all about reducing the cognitive load so that you can just find what you want without entering in all the search criteria. 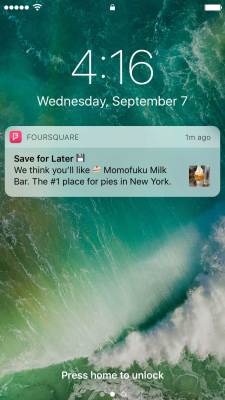 The updated iOS 10 interface for Foursquare’s main app includes beautiful photos, ratings, and action buttons. In fact, as the company continues to build on trust, a new development involves learning about the people who provide tips in the app. Now the app features “Amazon verified”-like listings where Foursquare shows how many times a person has checked into a venue next to their review. The number of times has always been a signal, but this is the first time where the actual visits count has been displayed in the app for everyone to see.

Lastly, Foursquare’s app now includes richer notifications, so you’re not just going to see names of venues, but also photos, recommended tips, and more on your lock screen, enabling you to make better decisions about places without having to even unlock your phone.

Crowley calls version 10 a “huge release that we’re proud of.” If this can improve discovery of hidden gems in your community, helping you navigate to the restaurant, bar, or venue you want, that could really be a good thing.